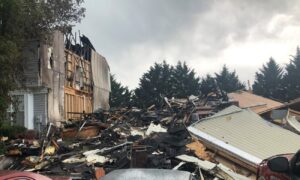 Officials say a 6-year-old boy died after his car crashed into a tree on Thanksgiving night in an apparent “road rage” incident.

The Maryland State Police stated that three vehicles were heading south on Route 13 in Salisbury at around 9:30 p.m. before the crash. The vehicles were going above the 65 mph speed limit, police said, according to Delmarva Now.

A white Toyota pickup truck carrying Kaleb Chatmon, 6, lost control and left the roadway before entering the median. The operator of the truck then swerved back into both lanes of the southbound section of the freeway, police said.

That’s when the truck crashed into a tree on the passenger’s side. Kaleb Chatmon and the driver, 55-year-old Kenneth Chatmon, were taken to the Peninsula Region Medical Center. The boy was pronounced dead at the scene, the report said.

Kenneth Chatmon was treated for critical injuries, the report added.

It’s not clear why the crash was described as a “road rage” incident. Maryland State Police said that alcohol and drugs are being considered in their investigation of the crash.

Officials also said the two other vehicles involved in the incident are being sought.

If anyone has knowledge of the crash or additional information the two other vehicles involved in the incident, they should call the trooper investigating at 410-749-3101 or the Maryland State Police at (410) 749-3101.

Salisbury, located on the Delmarva Peninsula, is about 15 miles west of the Atlantic Ocean and just south of Delaware.

Traffic Deaths Down in 2018

U.S. traffic deaths fell 3.1 percent in the first six months of 2018, according to preliminary figures released in October, Reuters reported.

The National Highway Traffic Safety Administration also reported that for all of 2017 traffic deaths fell by 1.8 percent to 37,133 after traffic deaths rose sharply in the previous two years, according to final figures.

The Governors Highway Safety Association noted that a strong economy usually correlates with an increase in traffic deaths “so this drop, while small, is encouraging news.”

NHTSA Deputy Administrator Heidi King said the agency is looking at a variety of factors to explain the reduction. Automakers are adding more crash avoidance features to vehicles to help warn motorists of a potential crash or slow a vehicle “and we’re very hopeful that will continue to be part of a trend,” King said.

The agency said over the last four decades the general downward trend in vehicle deaths is attributed to a variety of factors including increased seat belt use, reduced impaired driving, and features like airbags and electronic stability control.

The only increase in traffic death categories in 2017 was a 9 percent jump in deaths involving large trucks, including tractor-trailers. Deaths among truck drivers increased 16 percent. Officials noted that a growing U.S. economy means more freight is traveling on U.S. roads, one factor in the increase.