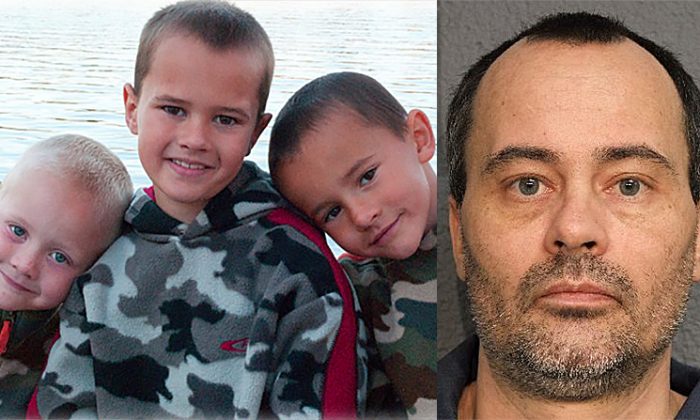 Andrew, Alexander and Tanner Skelton, from the Skelton Brothers website. (http://skeltonbrothers.org) next to their father John Skelton’s booking photo from the Michigan Department of Corrections. (mdocweb.state.mi.us)
Crime and Incidents

A cleaning crew alerted police on Sept. 27 when they discovered a box containing human skeletal remains while working on a vacant property in Missoula, Montana.

“Loose teeth, there was what appeared to be bone from a lower jaw, and others that were not as specifically described, but I would call them pieces of bones,” Missoula Police spokesman Sgt. Travis Welsh told KRTV. “There were also rocks in this box.”

The police said they couldn’t link the remains to any open cases. “Nothing we’ve been able to connect them to yet, however, we are working with the National Center for Missing and Endangered Children, and other missing person databases to see if that’s a possibility,” Welsh said.

“The thing is, there are missing children all over the world. And the thing is, we don’t know that this particular case is isolated to the city of Missoula.

“We don’t know where the bones came from, and if they were transported from one area to another, and ended up here.”

An anthropology professor from the University of Montana reported that the bones were contemporary, not archeological, and that they came from three children estimated to be 6 to 10 years old, 5 to 8 years old, and 2 to 4 years old, respectively, at the time of death.

When the news was made public in December, police in the small town of Morenci, Michigan took note.

Three boys, Andrew, 9, Alexander, 7, and Tanner Skelton, 5, went missing while in their father’s care over the Thanksgiving holiday.

The father, John Skelton, was in a bitter divorce dispute with his wife, Tanya Zuvers. Zuvers had full custody but allowed her husband to take the boys for the holiday.

He never gave them back.

In 1998, Zuvers, then 32, had pleaded guilty to misdemeanor sexual conduct. She had been accused of having relations with a 14-year-old boy. Zuvers maintains that she never harmed her children in any way. There are no reports in any way indicating that she did.

Skelton used that old conviction as his reason for not providing any data whatsoever about the whereabouts of the boys. Police were able to track his activities via cell phone data. Over the holiday Skelton had driven south to Ohio and back. They were never able to locate the mysterious child welfare organization which supposedly had custody—illegally—of the three children.

Through all this, the boys’ mother, Tanya Zuver, has tried to remain hopeful.

She spoke with the Detroit Free Press shortly before a 2015 Thanksgiving Day candlelight vigil she organized in honor of her missing boys.

“The past five years I have been to hell and am on my way back, but won’t be completely there until I have answers,” Zuvers said.

“Today is a much better day than last year. I remain strong in my faith and rely on that faith to get me through each day.”

When she heard about the news out of Montana, Zuvers posted on Facebook.

“This information has just been presented to our family within the last several hours,” Zuvers wrote. “We are processing it and hopeful that we will have answers soon. We are thankful for all your thoughts and prayers.”

Kathye Herrera, a friend of Tanya Zuvers, said that even if the remains proved to be those of the missing children, it would be better for her friend to know that than to go on not knowing.

“Answers. We’ve been praying for answers,” she said. “If that could give the family peace of mind, it may not be the answer we want, but it would just enable the family to have some closure.”