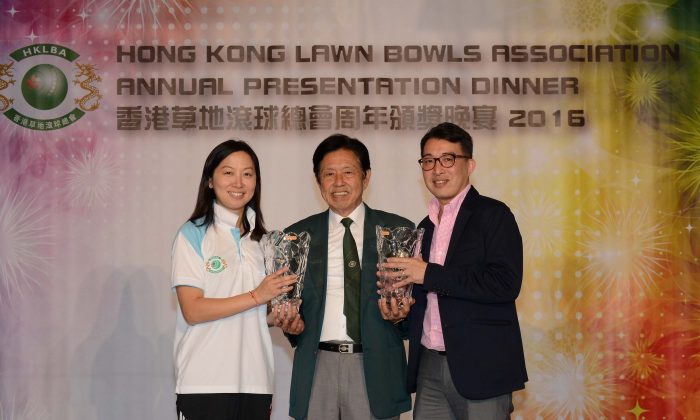 Bowlers of the Year Say ‘Luck’ is the Key Winning Factor

Lawn Bowls—Bowler of the Year
By Claudius Lam
biggersmaller
Print

HONG KONG—After winning the 2016 Bowler of the Year awards, both Chadwick Chen and Dorothy Yu attributed their success to the element of “luck”.

Chen, who played bowls for 34 years since the age of eight and was now represents Kowloon Cricket Club, won his first National Singles and entered the quarter-finals of the National Triples this year, accumulated 31 points to edge out second-placed Stanley Lai and Imen Tang by a point.

He believed that he was lucky to win the BOTY award because he did not practise nor play much this year, “My prime target was on the National Singles because I have progressed to the semi-finals for six times but never won it. Once I got that, everything else was just a bonus. I was lucky because other competitions went to different players so the points were spread around. I just have enough points to win it.”

Looking forward, Chen would like to contribute to the success of the Hong Kong team however, the pre-requisite was that he needed to have the spare time to do it, “I really like to represent Hong Kong but I have been tied up with my business and my young son in these few years. I think the best thing I can do is to keep my standard and achieve the results locally. Once I have the opportunities I will contribute again”.

For Hong Kong Football Club bowler Yu this was her second BOTY award in three years.  Her last achievement was in 2014 when she shared the honour with Rita Tsui.

This year Yu won the National Singles, reached the final of the Classic Singles and was a quarter-finalist of the National Pairs. She earned a total of 48 points, 18 more than second-placed Tammy Tham, the Bowler of the Year last year.

She also felt that luck contributed a lot in her success, “The standard of the bowlers has been improved so sometimes you need a bit of luck to achieve a result. Throughout the year I was able to maintain my standard and did particularly well in the two singles”.

Looking forward, Yu hopes to achieve better results in team games because so far she has only won the National Fours in 2012.

Same as Chen, Yu had also withdrawn from the Hong Kong team due to work commitment, “As the champion of the National Singles I will still represent Hong Kong in the World Champion of Champions and I hope I can get a good results for Hong Kong.”

The awards were presented at the Annual Prize Presentation Dinner organised by the Hong Kong Lawn Bowls Association last Friday, May 26.

Bowler of the Year criteria

Operating on a points system, players were awarded points for each game that they won at the four elite national competitions – namely the Singles, Pairs, Triples and Fours, as well as the Hong Kong International Bowls Classic. The player with the highest accumulation of points during a year will be the Bowler of the Year.

The Premier league continues this coming Saturday June 3, with matches starting at 2:30pm at all greens in Hong Kong. On Sunday June 4 there will be a Fun Day at Yuen Chau Kuk Lawn Bowls Green between 2:30 and 6pm.