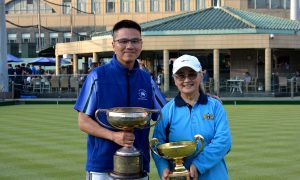 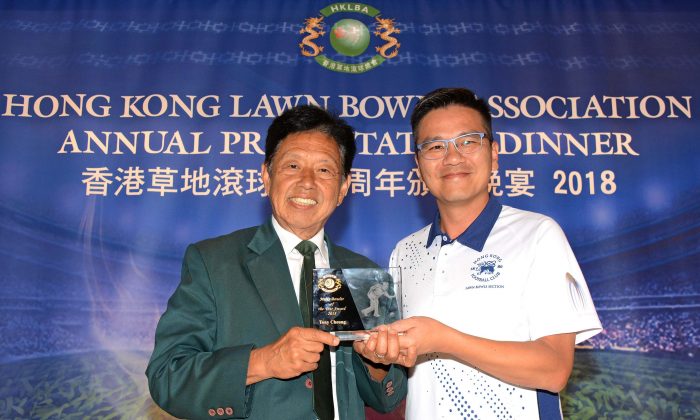 Tony Cheung (right) from Hong Kong Football Club receives his second Bowler of the Year trophy from Vincent Cheung, the President of the Hong Kong Lawn Bowls Association at the HKLBA annual presentation dinner last Friday, May 31. (Stephanie Worth)
International

Bowler of the Year: Diligence and Persistence the Keys to Success

Lawn Bowls—Bowler of the Year
By Claudius Lam

HONG KONG—Elite bowlers Tony Cheung and Vivian Yip both became the second players to successfully defend their Bowler of the Year (BOTY) title in the history of lawn bowls in Hong Kong.

He edged out Arthur Lam from Kowloon Cricket Club by six points in the Bowler of the Year table.

He is the first bowler to win the ultimate award for two years in a row, after George A Souza Junior did it in 1990 and 1991.

Cheung is obviously delighted and honored to receive the award in consecutive years, “It demonstrated to our bowlers in Hong Kong that if you work hard, anything can happen.  I am not a talented bowler but I believed my diligence and persistence compensated for it.  To overcome your weakness you need more practice, this is a never-ending process and it require a high level of commitment.  I think it makes the difference.”

He did not set a target for himself when he started bowling 13 years ago, “What I achieved today has obviously exceeded my widest expectation.  I am lucky because there were a lot of good players at that time and provided me the chance to learn from them.”

Looking forward, he would like to help Hong Kong to glory in the forthcoming Asia Pacific Lawn Bowls Championship later this month and the World Championship next year, “The new coach Geoffrey Maskell has bought a number of new ideas to the team and now our morale and harmony has reached new height. Hopefully we can achieve good results there.”

After receiving his BOTY award at the prize presentation dinner of the Hong Kong Lawn Bowls Association last Friday, May 31, Cheung, who is the captain of the Hong Kong team at the Asia Pacific Championship later this month, also led his team to receive the Hong Kong national flag from representatives from the Leisure and Cultural Services Department.

Also representing HKFC for most of the year, Yip won the National Pairs and broke into the semi-finals of the singles at the Hong Kong International Classic to beat second-placed Helen Cheung from Craigengower Cricket Club by a single point.

Last year Yip became the youngest ever women BOTY after sharing the award with Shirley Ko from Indian Recreation Club.  This year she became the second women to win the award for two successive seasons, after Camilla Leung from HKFC in 2007 and 2008.

Bowler of the Year criteria

Operating on a points system, players were awarded points for each game that they won at the four elite national competitions – namely the Singles, Pairs, Triples and Fours, as well as the Hong Kong International Bowls Classic. The player with the highest accumulation of points during a year will be the Bowler of the Year.

The Premier league continues this coming Saturday June 8, with matches starting at 2:30pm at all greens in Hong Kong. On Sunday June 9 there will be round 3 of the National Fours at most of the greens in Hong Kong, the game times are 10:00am (men) and 3:00pm (women).