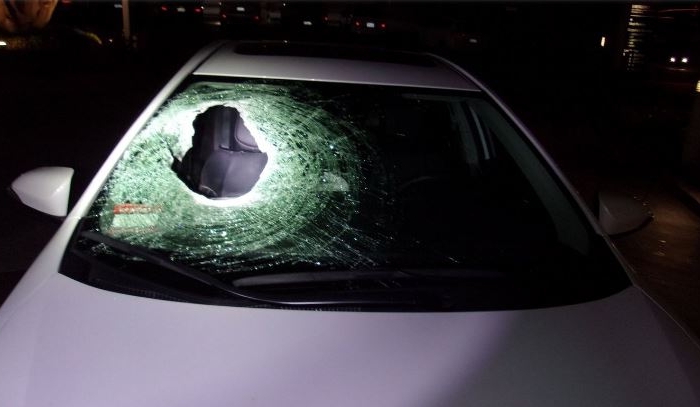 A boulder that smashed into a car windshield in California, killing a passenger, was intentionally dropped, according to officials.

Lopez’s pregnant wife, Guadalupe Gutierrez, was driving the car but was not injured by the boulder.

The couple’s 4-year-old daughter, sitting in the back seat, was unhurt as well.

The CHP believes the boulder weighed between 30-35 pounds. Here is what the damage looked like. pic.twitter.com/sb22VvVvPo

Gutierrez pleaded with the public in a news conference, asking anyone with information about who pushed the boulder to come forward, reported WSMV.

“If somebody saw something. Please help us,” the victim’s father Francisco said, reported the Pasadena Star-News.

The impact of the boulder made the car swerve but Gutierrez was able to maintain control, reported CBS.

The CHP is trying to find the person(s) who tossed a boulder onto the 134 Freeway, which killed a car passenger in Pasadena. pic.twitter.com/Jze0mK96NN

“This shouldn’t have happened this way. He’s a young father who was just with his family. To find his death this way is something very hard for the family. … This can’t stay this way.”

Gutierrez rushed her husband to the emergency room to try to save his life. Doctors did their best but he ultimately succumbed to his injuries, reported KTLA.

Authorities said that the act was definitely intentional.

“This was an intentional act. Any prudent person would know that a boulder that size would seriously harm someone driving on the freeway below,” California Highway Patrol Lt. Chuck Geletko said.

“This was an innocent family, driving home. We need help from the public to find the person who committed this atrocious act and prevent this from happening to another family.”

Investigators are working to obtain DNA off the boulder.