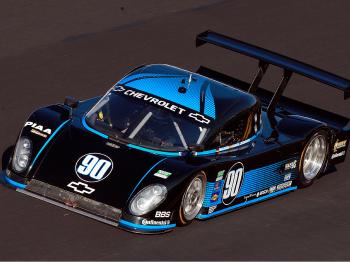 David Donahue took the lead in lap 67 of the Grand Am Rolex 24 after three hours of racing at Daytona International Speedway. (Sam Greenwood/Getty Images)
Motorsports

By James Fish
Print
As daylight faded, Christophe Bouchut in the #55 Level 5 Riley BMW led the Grand Am Rolex 24 hour race at Daytona International Speedway. After three hours and 90 laps of racing, Bouchut led by a few seconds over IndyCar driver Justin Wilson in the # 6 Shank Racing Dallara Ford by less than a second.

Third was David Donahue, driving the #5 Action Express Riley Porsche. Donahue had held the lead from lap 67 until a yellow flag on lap 84 closely pursued by Paul Edwards in the #90 Spirit of Daytona Coyote Chevrolet until Edwards got caught up in a multi-car spinfest at the chicane on lap 78.

The #45 Flying Lizard Riley Porsche, with Jorg Bergmeister at the wheel, dominated the first 52 laps, leading by 15 seconds, when it surrendered the lead during a pit stop. Then luck turned against the Lizards; Scott Tucker in the Level 5 Riley BMW collided with the Lizard car, driven by team owner Seth Neiman, on the restart, forcing Neiman to pit for repairs.

Shortly after Neiman got back on track, he came upon three GT cars spinning through Turn Four. Neiman had to go off course to avoid them, and broke the radiator coming back onto the track, sending the Lizard car to the garage for lengthy repairs. The Lizard car eventually rejoined, 19 laps down.

Both Telmex Ganassi cars, favored to win with their all-star lineup, experienced early setbacks. Series champion Scott Pruett brought the 01 car in for a gear change under yellow on lap 30, but lost a lap, despite the crew changing the transmission’s innards in a phenomenal four minutes, 21 seconds.

Pruett was able to get back onto the lead lap before handing off to co-champion Memo Rojas.

IndyCar racing star Scott Dixon, in the 02 Telmex Ganassi car, was hit with two flat right rear tires in the first 50 laps, costing him two laps. The team opted to adjust the rear camber as the combination of the new-to-the-series Continental tires plus the stickier-than-expected fresh Daytona pavement caused unexpected tire wear.

Another IndyCar driver, Ryan Briscoe in the #10 SunTrust Dallara Ford, was fourth; Terry Borcheller in the second action Express car rounded out the top five.

In GT, Bill Auberlen in the Turner Motorsports BMW M3 led comfortably over Richard Leitz in the #44 Magnus Racing Porsche. A host of Porsches followed: Patrick Pilet in the #54 TRG/Black Swan GMG car, Leh Keen in the Brumos Racing car, and Rob Bell in the Paul Miller Porsche rounded out the top five.

The GT battle started fiercely with Dominik Farnbacher in the #66 TRG Porsche and Craig Stanton in the #44 Magnus Racing Porsche trading the lead, only to be overtaken by Robbin Liddel in the #57 Stevenson Camaro.

Boris Said in the Turner M3 passed Liddel for the lead on lap 45. On lap 54, Liddel suffered a fuel pressure problem and had to head to the garage. The car reentered the race with Jan Magnusson at the wheel, 29 laps down.