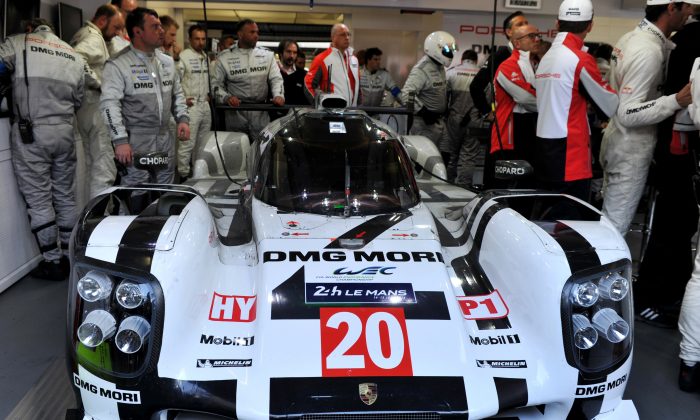 Mark Webber and his crew look at the expired #20 Porsche 919 Hybrid in the paddock during the 82nd edition of the Le Mans 24-hours, on June 15, 2014 in Le Mans, western France. (Guillaume Souvant/AFP/Getty Images)
Motorsports

Both Porsches Out With 75 Minutes Left at Le Mans 24

With a few hours left, Porsche led at Le Mans. Less than two hours later, there were no Porsche prototypes on track.

Porsche came back to Le Mans as the team with the most wins in history, but still very much the underdog facing the might of Audi and in its third season, Toyota. Porsche chose to reenter endurance racing when the rules demanded the most technologically advanced cars ever raced.

Toyota was fastest, Audi most durable and best prepared; Porsche would have been lucky just to finish. It seemed like a fairy tale when attrition left the #20 Porsche in the lead with three-and-three-quarters hours left in the race.

The fairy tale quickly turned into a horror story. With two hours left in the race, Mark Webber had the #20 Porsche 919 Hybrid;’s motor die on him on the Mulsanne Straight. Webber limped back to the garage and watched the Audis streak past, pushing the Porsche down the order.

The second car, the #14 919 with Marc Lieb at the wheel, circulated quietly in fourth place, nine laps back and with no hope to advance; at least the car would finish.

Or not. While Mark Webber was climbing out of the #20, indicating surrender, the #14 Porsche also expired with a broken transmission. Lieb limped back to the pits, climbed out and talked to his mechanics, and said nothing—but his body language told the story.

Porsche will probably fix the cars just enough to complete a final lap just before 3 p.m.—a consolation prize is all that is left for the team.

With one hour left, Audi ran one-two, with the #2 leading and the #1 three laps down—but two laps ahead of the #8 Toyota.

In GTE-Pro Gianmaria Bruni in the #51 AF Corse Ferrari led Antonio Garcia in the #73 Corvette by a lap, with the #92 Manthey Porsche of Frank Makowiecki a further lap down.

The #97 Aston, and its #95 GTE-Am sister car, both entered the garage with an hour to go. The #95, which has a broken throttle sensor retained the GTE-Am lead over the #88 Proton Porsche. Apparently the car can be run a few laps, then rebooted and run a few more, enough to get to the checkered flag at the head of the class.