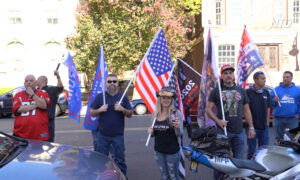 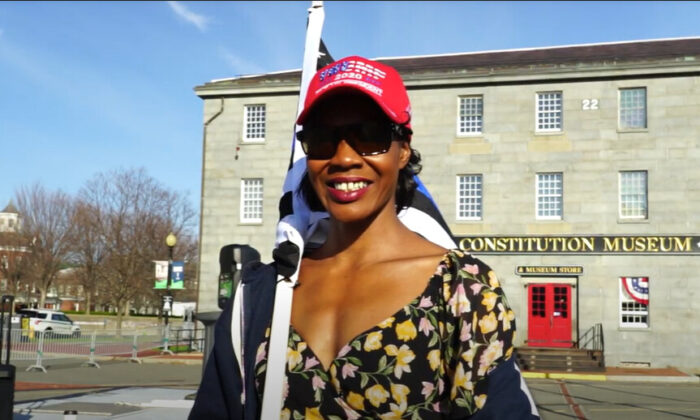 Boston Voter Says Left Would Do Anything to ‘Destroy’ Trump

BOSTON—Rayla Campbell said it’s time for Americans to act with clarity, to see the left for what it is and hold our representatives accountable as this contentious election plays out.

“I think that the left wing media and their way of calling an election before the votes are even counted is a way of suppressing American votes, and we as Americans need to stand up for the real, true elections, legal votes counted,” Rayla Campbell said at a Stop the Steal rally in Boston on Nov. 21, 2020.

Thousands of people participated in grassroots rallies in state capitals across the country on Nov. 7, 2020, and again a week later on Nov. 14 across the country with more traveling to Washington to demonstrate. Many have committed to rally every Saturday until results are certified on Dec. 14

She believes the widespread use of mail-in ballots contributed to voter fraud and have muddled the election results.

“I believe the mail in process is completely illegal and should have never been allowed, under our Constitution,” Campbell said.

“With these mail in ballots, a mass of ballots were mailed out to people, multiple ballots to people’s homes,” she said, including people who have died or no longer live there. “How are we to know those ballots aren’t among the ones counted?”

The media weren’t the only ones Campbell said were irresponsible; she said the left overall has shown to be willing to do anything to win, including destroying American institutions.

“They cheat, they lie, they steal, they break the law. And the president is exposing exactly what they are doing,” she said. “I think they did absolutely everything and anything they could to destroy our president.”

“They should be held accountable. People should not be alowed to go around and cheat your way through life and think that’s OK. That’s not how we live in a democracy, in a complete, free union where we can have our rights, speak freely about anything,” she said. “It’s really difficult to look around and see what is happening to our democracy, to see that the left has completely turned to communism and socialism and is trying to push that onto the American people without them even realizing it.”

“We have to be willing to stand together with real republicans, stand united. Call your state representatives, in Congress, who are in office right now, and hold them accountable for what their actions are. Expose to them what exactly a Biden America is, with the attacks on Americans,” she said. “Have you ever gone to a Biden rally and had a Trump supporter attacking anybody? No because we’re hardworking Americans and we understand that you have your freedoms and liberties as well, freedom of speech being number one.”

“Yet we’re attacked every single day and no one says anything about it,” she said.

She berated those on the left for blindly following the mob.

“The left needs to wake up and realize violence is not the way. ‘Silence is violence?’ Well their violence is not silent. And we as republicans, as true patriots of America, need to stand up and fight for what we believe in, American values and the American way,” she said.

“Liberty was born here in Massachusetts, and I will not let it die here,” Campbell said.

“I was born in a family that comes from slaves,” she said. “And we have done so much.”

“You can do whatever you want if you work hard for it and that’s what we need to instill,” she said. “It’s family, and American values and our traditions.”

“I saw that being ripped away for us and we cannot allow that to happen. We are Americans and we should be proud of it. Every other country is proud of who they are, we need to be proud of who we are as well,” Campbell said.

Campbell says she is from the south of Massachusetts, in a city that her Irish friends have repeatedly told her is the most Irish place in the world second to Ireland itself. “So we know how to fight,” she said with a laugh.

As we approach Thanksgiving, Campbell hopes we can honor what that tradition means.

“This is year is the 400 anniversary from when the Pilgrims landed on Plymouth Rock,” she said. “And we need to be celebrating that.”