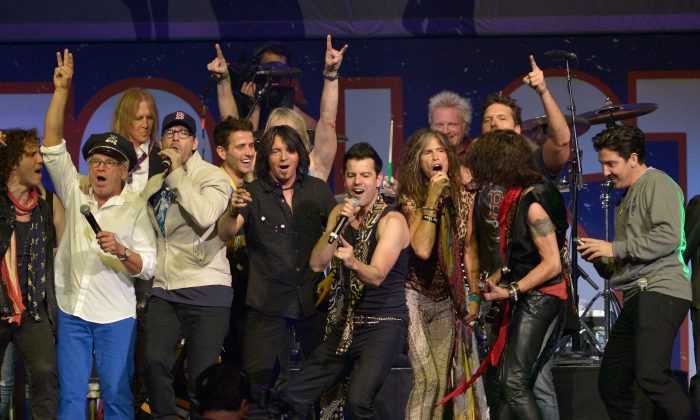 All the performers gather on stage at the end of the evening's performance performs during the Boston Strong: An Evening Of Support And Celebration, including Jimmy Buffet, Doug Flutie, James Taylor, Steven Tyler, Donnie Wahlberg, Steven Tyler, J. Geils Band, New Kids on the Block, Boston and Extreme at TD Garden on May 30, 2013 in Boston, Massachusetts. (Photo by Paul Marotta/Getty Images)
Boston Marathon

Boston strong concert: A range of bands and other stars highlighted a benefit celebration for the victims of the Boston Marathon bombings on May 30.

The celebration, put together quickly, brought in more than $1.5 million, according to the Boston Globe.

“What makes a civilized community civilized is how you treat other people,” said Seth Hustman, keyboardist for J. Geils. “This to me is the best of that.”

“It takes a lot of commitment from a lot of people. An undertaking like this is pretty epic,” said Donnie Wahlberg of New Kids on the Block. “But it’s the least we can so to honor our city.”

Veteran rockers Aerosmith helped close the 5 ½ hour concert. After an energetic run through hits, such as “Walk This Way” and “Sweet Emotion,” they were joined on stage by 1990s boy band New Kids on the Block and other performers for the Beatles classic.

The concert kicked off with the rock band Boston playing songs including its 1970s hit “More Than a Feeling.”

“Tonight, we are all Boston,” lead singer Tommy DeCarlo declared to a crowd of thousands of people, including victims and first responders, at the TD Garden.

“Boston got its heart broken … but if they think they can keep us down, they can ‘Dream On,’ said frontman Steven Tyler before Aerosmith played their hit by that name.

All the bands and performers appeared at the event for free.