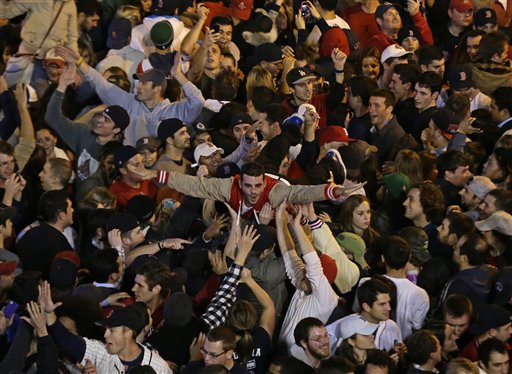 Hundreds of riot police officers were deployed around Fenway Park in Boston on Wednesday night ahead of a Boston Red Sox victory in the World Series against the St. Louis Cardinals. The Red Sox defeated the Cardinals 6-1.

Pictures from the scene showed the police and increasing mayhem in the city as people celebrated the win.

Police officers were deployed on bikes, horses, and helicopters.

Boston Police said that at least seven people were arrested for unruly behavior.

Reports said that the officers were on high alert around the park as tens of thousands of fans congregated.

A large crowd was seen gathering around the finish line of the Boston Marathon, the site of a terrorist bombing earlier this year that killed three people. Many cheered, “Boston strong,” the post-bombing mantra during the city’s recovery.

There has been at least two cars overturned, and fans jumped onto a moving cab on Massachusetts Avenue.

However, the riots and celebration appear to have died down as people began leaving the area around the stadium.

The Red Sox victory over the Yankees in the 2004 American League Championship Series sparked riots as well.

[View the story “Boston: Riots After World Series” on Storify]