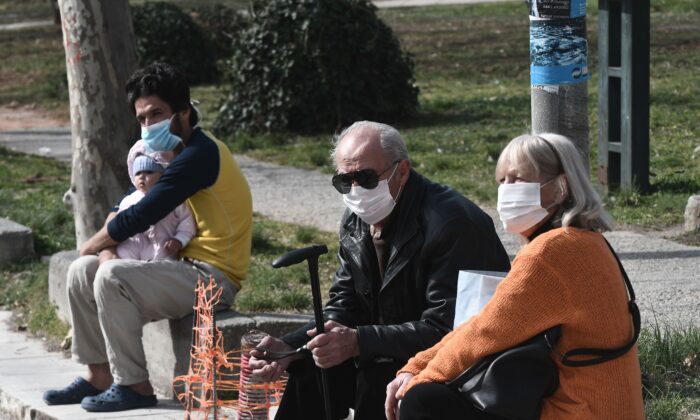 People with face masks sit outside of the hospital of Ahepa in Thessaloniki on Feb. 26, 2020, the same day the country reported its first case of the new coronavirus. (Sakis Mitrolidis/AFP via Getty Images)
WORLD

A Boston Red Sox prospect from Taiwan was placed under quarantine in his Florida hotel room over fears that he might have contracted the COVID-19 coronavirus, according to the team.

Chih-Jung Liu, 20, arrived at Red Sox spring training in Fort Myers last week, and he was quarantined in the room out of “an overabundance of caution,” a team spokesman told the Boston Globe.

Liu flew from Taiwan to San Francisco to Fort Meyers, Florida, last week, according to the team.

Liu, in social media posts, said that he feels fine and hopes to play on Saturday. He also wrote that he is being delivered three meals a day, doing weight training, and going for a run.

But he is otherwise “watching information about the team” and reading, he said, according to the Boston Globe.

The Red Sox briefly quarantined infielder Tzu-Wei Lin, who also is from Taiwan, earlier in February. “I had been here for a week and they said I needed to go back to my apartment,” Lin told the paper. “I was fine. I stayed away for one day and that was it.”

The U.S. Centers for Disease Control and Prevention confirmed Tuesday that there are 57 confirmed cases of COVID-19 in the country, with the bulk of cases having been diagnosed among evacuated passengers of the Diamond Princess cruise ship that was held off the coast of Japan for two weeks. There are 14 U.S. cases of the virus, while several states are monitoring more than 1,000 people for symptoms of the disease, which emerged in China late last year.

Taiwanese health officials have confirmed 31 cases of COVID-19 in the country as of Tuesday, according to the Taiwan News. The latest patient was an 11-year-old relative of a previous patient.

The United States currently has no travel restrictions in place for Taiwan.

“All travelers arriving in Taiwan will be required to complete a health declaration form and accurately provide their travel and contact history over the past 14 days before entry,” according to the American Institute in Taiwan. The country also has implemented temporary visa and travel restrictions over the virus.

China is believed to have the most cases and deaths from the virus, although the accuracy of the figures provided by the Chinese regime have been questioned. The virus has prompted mass lockdowns and strict controls in Wuhan and Hubei Province, where the virus is believed to have originated.

Meanwhile, U.S. health officials warned Tuesday that it’s only a matter of time until the virus begins to spread inside the United States.