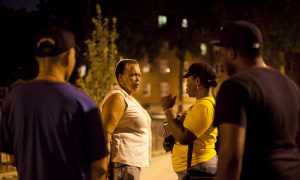 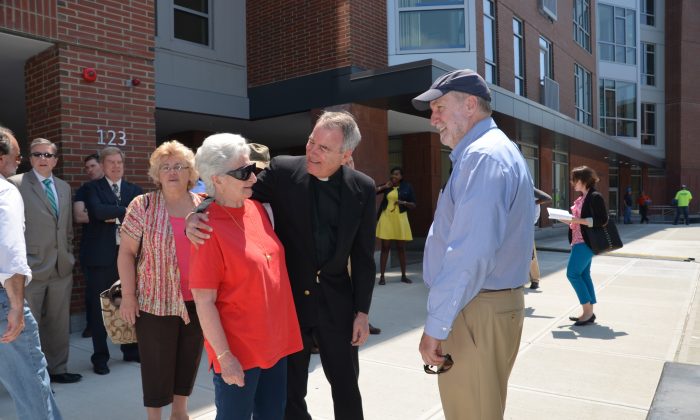 Father Frank Glynn talks with residents at the opening of the Josephine A. Fiorentino Community Center at the Charlesview Residences in Boston, Mass. Creating a community was a central part of development plan for this affordable housing complex. (Deborah Addis, Addis Communications)
US

BOSTON—Most affordable housing developments are four walls and a roof, but developers of the Charlesview Residences in Boston know it is community that makes a house a home.

It also keeps the neighborhood safe and its inhabitants happy and productive.

Peggy Ronana grew up in the Charlesview Apartments, a secluded housing project tucked away between the Charles River and Harvard Business School in the Allston section of Boston.

“It was the kind of place where you take in other people’s kids when the parents are working,” she said, describing an almost picturesque childhood.

That’s not something that can be said of most affordable housing developments in the United States.

Affordable housing projects in America’s big cities tend to be a magnet for violent crime and drug dealing.

Cities like Atlanta and New York have gone so far as to knock them down, displacing residents and building mixed income housing or market rate housing instead.

The question of how to provide affordable housing that is safe and comfortable without fostering dependence on welfare services is a question that haunts the nation.

This quiet corner of Boston, just may be a part of the answer.

Marie Ace was one of the first residents of Charlesview in 1971. She raised three children there, and now lives just down the street in a home she bought in 1998. She serves on the board of directors for Charlesview.

“It was a great place to raise your kids and to live,” she said. In 27 years she could only remember a handful of times they had problems with violence or drugs, and even then she notes that the troublemakers were outsiders.

“We had a couple kids from Brighton who were selling drugs, one night they beat up a Spanish kid. Word spread so fast. Everyone came out of their houses with sticks and things and we chased them off the corner. They never came back,” she said.

Father Frank Glynn of St. Anthony’s, who chairs the board of Charlesview, knows of no other project quite like it:

“In this world where people of faith don’t often get along, often wind up killing each other, it is remarkable that this is the product of a 60 year saga of Jewish, Protestant and Catholic groups working together for the good of the community.”

Charlesview is both multi-denominational and non-denominational, the residents are of any faith or none at all. They hail from around the world, speaking over 13 languages, and also from right here in Boston.

“We have a wonderfully diverse community in terms of age, race, ethnicity, languages, its a wonderful mixing pot,” said Joanne Barbour, the executive director of the newly constructed Charlesview Residences.

“We have residents who have lived here over 40 years, and new families that are just moving in,” she said.

Families moving in this summer have found a home in the brand new, $200 million, mixed income housing complex now known as the Charlesview Residences.

The new site replaces the crumbling 1970s concrete cluster of buildings that Ronana remembers so fondly.

Located about 10 blocks from the old location this new site has 240-units of different kinds of affordable housing.

The units are modest but have large bright windows and a washer and dryer in every unit. Many are accessible or designed so that accommodation can be added as needed.

The second phase of the project, not yet under construction, includes both market rate and affordable units for sale.

Elsa Rojas, 66, works as a bookkeeper at a local Jewish temple and just moved into her new apartment in June. “I am so happy, I will live my golden years in a beautiful place,” she said.

She has lived in Charlesview for 30 years and it has given her all a mother could want: the chance to raise two successful children.

Her daughter recently bought an apartment in nearby Brookline, and her son, who now lives in Quincy, is soon to be married.

The new development is possible in part because of Harvard University. Like many universities Harvard has had a rocky relationship with the community it inhabits.

It’s recent purchase of large swaths of Allston for a planned campus expansion has draws much criticism from residents.

But as Harvard grew ever larger over the years, the small plot of land, home to the old Charlesview, became more desirable. In 2010 Harvard offered the community a unique land swap deal, which included funds to build a new development.

At the center of the new development is the Josephine A. Fiorentino Community Center. It’s named for a woman who survived the Great Depression with a deep faith in the transformative power of community.

The community center was designed to be the physical and social center of the community.

“It is going to bring people from the surrounding area into the heart of Charlesview,” said John Cusack, a board member as well as a union carpenter who continues to work on the last phases of the construction.

Everything about Charlesview was designed with community in mind, from the architecture of the townhouses which fit in with the existing homes, to the layout of the streets. The inclusion of commercial space will provide income to support the development and line the busy street with new shops.

Cusack, who grew up, and still lives nearby, brought his 13-year-old daughter to see the site change from a hole in the ground into a neighborhood.

“Having contributed even the smallest part to this effort has made me feel extremely proud,” he said.

Standing in the gently lit halls it is clear that he is not the only one.

The rooms were filled with chatter and smiling faces. It felt more like Thanksgiving dinner with family than the formal opening of a community center.

It’s the people that make Charlesview so special, according to Luz Marina Carmona, who lives there with her son.

“My favorite thing is that I have my friends here, my family. I have great neighbors,” she said.