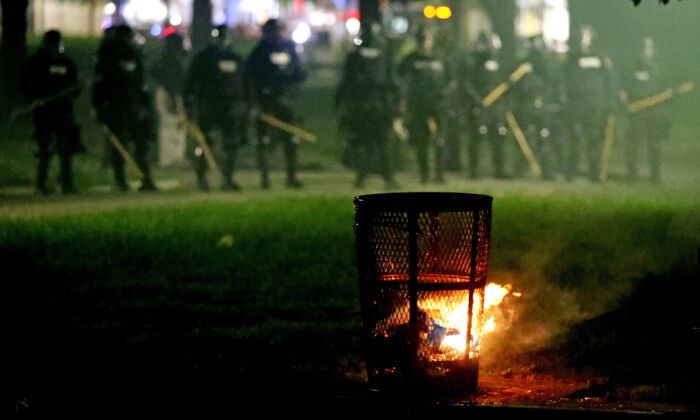 Two Boston police unions filed a civil lawsuit on July 18 to stop the city from enforcing an ordinance that makes it harder for police to use nonlethal weapons for crowd control.

It’s the latest law enforcement pushback against a national trend of growing restrictions on police usage of nonlethal weapons following the protests brought about by the death of George Floyd in Minneapolis on May 25, 2020.

The lawsuit (pdf) argues that according to the Boston police commissioner’s statute, the commissioner—not city hall or the city council—has complete control over rules and regulations for its police force.

“We will not stand silent while our city council picks and chooses what they want from our officers based on politics and public opinion rather than public safety,” plaintiffs the Boston Police Superior Officers Federation and the Boston Police Detectives Benevolent Society said in a statement.

“By eliminating our officers’ ability to use non-lethal force, city councils themselves are forcing escalation of incidents with their irresponsible and poorly researched policies.”

On April 28, 2021, then-Mayor Kim Janey signed off on a new ordinance (pdf) that allows for police usage of tear gas, chemical spray, and rubber bullets at a gathering of more than 10 people only after approval by an on-scene supervisor at the deputy superintendent level. Before the on-scene supervisor can authorize any nonlethal weapons, he or she must exhaust other means of crowd control, give two separate warnings about the specific weapon to be used, and wait for at least two minutes after the last warning.

The lawsuit, filed in Suffolk County Superior Court, contends that there’s often no supervisor at or higher than the rank of deputy superintendent on scene and that the ordinance doesn’t account for situations that demand immediate responses.

It also points out the ambiguity in the 10-person threshold, such as whether it counts bystanders or even first responders.

The lawsuit was filed days after Wu announced her new pick for the top police job, Michael Cox. He’ll head a police department with just less than 2,000 sworn officers.

In the past, a Boston city ordinance (mandating shotguns for police cars) was found to be invalid by a superior court judge because it was thought to violate the police commissioner’s statute, according to the lawsuit.

The lawsuit also cites a Massachusetts appellate court opinion that states that managerial control over weapons falls squarely under that statute.

Ricardo Arroyo and Andrew Campbell, two council members who filed the ordinance, said at the time that nonlethal weapons indiscriminately affected a large number of protesters and caused serious injuries.

At least seven states and 16 cities have acted to put more restrictions on tear gas and rubber bullets in the wake of the George Floyd protests, according to a tally by the International Center for Not-for-Profit Law.

Some also enacted laws, ordinances, or policies to restrict guns at protests, limit the transfer of military weapons to local law enforcement, and require officers to display names or badge numbers at protests.