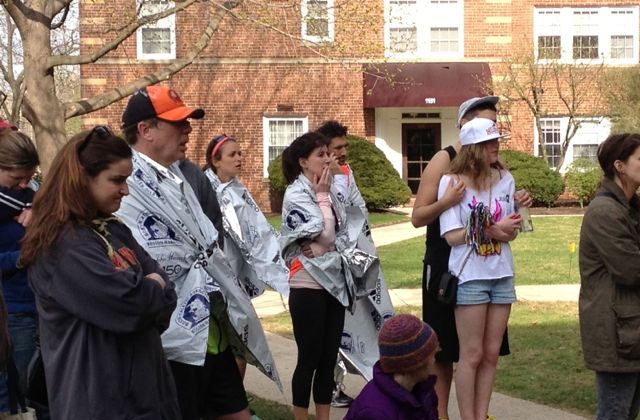 Boston Marathon runners stopped by police at mile 24 watch a local new broadcast on a TV set up on the lawn of Gail McManaman along the marathon route, April 15. (Phoebe Ryles/The Epoch Times)
Boston Marathon

Neighbors Lend a Hand to Boston Marathon Runners After Explosions

BOSTON—Gail McManaman and her coworkers were relaxing on the lawn of her Beacon Street apartment watching the Boston Marathon when two explosions at the finish line stopped the party in its tracks.

“We were watching the marathon and we had the TV out to watch the Red Sox game at the same time,” she said, a bit frazzled and surveying the crowd.

Gail and her family turned the TV to local broadcasting so that runners could stay tuned to what was happening just two miles down the road at the finish line.

Marathon runners and watchers gathered around the TV, dumbstruck as the news of multiple explosions and a growing number of injured came in.

Families waited along Beacon Street, hoping to see their loved one walking back along the route to safety.

Cell phone service in the area was overloaded after the explosions. Gail and her family brought down a power strip and their phone chargers so that runners could charge their phones and call their families.

“It’s a public service at this point,” Gail said of her efforts to help out. Almost everyone watching knew someone who may have been downtown.

Gail and her co-workers were relieved to find out that the Vice President of their company, Solarflair Energy, who was running the Marathon, was safe. His children were downtown in the stands waiting to cheer as he crossed the finish line, so they had real reason for concern.

“He had just passed here when the bombs went off,” she said. Her home is just two miles from the finish line, right next to the Red Cross tent set up at mile marker 24.