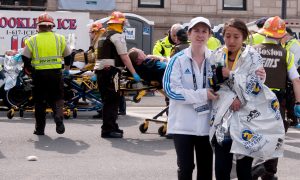 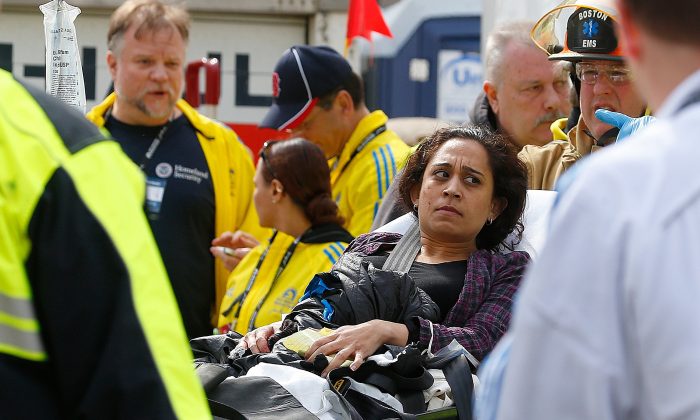 A woman is loaded into an ambulance after she was injured by one of three bombs exploded during the 117th Boston Marathon near Copley Square on April 15, 2013 in Boston, Massachusetts. (Jim Rogash/Getty Images)
Boston Marathon

The two bombings at the Boston Marathon, which left 2 dead and 23 injured, was likely the work of amateur terrorists, says Max Abrahms, terrorism expert and fellow at John Hopkins.

“Clearly, they’re not a highly capable group, and that’s consistent with the terrorism threat of today, which is being picked up by amateurs,” Abrahms said. “They generally have very little financial backing. These are what’s known as self starters.”

“Because of the success of counterterrorism efforts, it is very difficult for large groups of terrorists to coordinate and plan together, so you have small groups of people who are learning how to make explosive devices on the Internet,” Abrahms said. “This kind of attack is emblematic of the contemporary terrorism threat of today.”

During the Boston attack, two bombs were detonated at the finish line of the Boston Marathon. They blew up not at the same time, but very close together.

“This is a common thing for terrorists to do—they have multiple attacks simultaneously,” Abrahms said. “Sometimes they try to make it so the first aid responders get hit by the second attack.”

Authorities thought that a third bomb detonated later near the JFK Library, although now they are saying it could have been caused by an electrical fire.

Abrahms said that if this was a bomb, the technique is often seen with Palestinian terrorists, where they’ll “have one bomb that’s detonated slightly later.”

“They were not that skilled. It was probably just one or two guys, or a small cell,” he said, noting that they also likely used small explosives.

For terrorist groups, Abrahms said the attacks do not “pose any kind of existential threat to our country.” Yet, in terms of threat perception in the eyes of Americans, the attacks have had a large effect. “The perpetrators did not have a great deal of technical know-how and conventionality, but look at the fallout … look at the chaos that ensued.”

“I certainly think it’s something we might see more of,” he said.