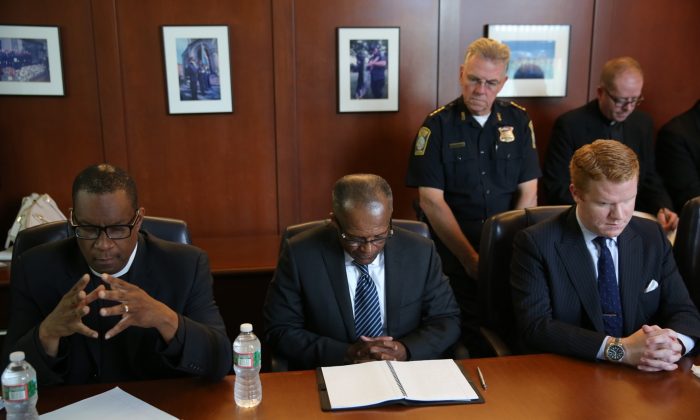 Community members and police officials pray at the Boston Police Department headquarters before seeing a video, Wednesday, June 3, 2015, in Boston, of a fatal police shooting on Tuesday, in the city's Roslindale neighborhood. (David Ryan/The Boston Globe via AP, Pool)
Crime and Incidents

Boston Leaders: Video Proves Black Suspect Not Shot in Back

BOSTON—A knife-wielding black man killed by the terror investigators who had him under surveillance was confronted because he had purchased knives and talked of an imminent attack on “boys in blue,” the FBI said Wednesday.

Usaama Rahim plotted for at least a week to attack police, the FBI said in a complaint against David Wright, who was arrested the same day Rahim was shot to death. Wright was ordered held Wednesday on a charge of conspiracy with intent to obstruct a federal investigation.

The FBI says the two men bought three fighting knives and a knife sharpener on or before May 26, and alleges that Rahim told Wright Tuesday that he would begin trying to randomly kill police officers in Massachusetts.

Faced with an imminent threat, the anti-terror task force of FBI agents and Boston police confronted Rahim on a sidewalk, and fatally shot him when he refused to drop his knife, authorities said.

The FBI complaint refers to part of a recorded conversation between Rahim, 26, and Wright, 24, in which Wright made a comparison to “thinking with your head on your chest.” The FBI alleges that this was a reference to Islamic State propaganda videos showing severed heads on the chests of beheading victims.

Rahim’s family is prominent among Muslims in Boston, where his mother is a nurse at Boston University. His older brother, Ibrahim Rahim, is a scholar known for preaching that violence is anti-Islamic after the Boston marathon bombings.

The imam’s version unraveled Wednesday after police showed their video of the confrontation to community leaders.

Ibrahim Rahim initially posted a message on Facebook alleging that police repeatedly shot his brother in the back on Tuesday while calling their father for help.

But the imam’s version unraveled Wednesday after police showed their video of the confrontation to community leaders.

Darnell Williams, president of the Urban League of Eastern Massachusetts, said afterward that he could “150 percent corroborate” the police account. The images clearly show that Rahim “was not on a cell phone and was not shot in the back,” Williams said.

The video, which police have yet to make available publicly, shows that Rahim menaced the officers with a large military-style knife and that they initially backed away before shooting him when he refused to drop it, police said.

Williams said he’s not ready to call the shooting justifiable, and a Boston Muslim leader, Imam Abdullah Faaruuq, said it wasn’t clear from the “inconclusive” video whether police had to use deadly force.

“They might have approached him in a different way,” Faaruuq said.

The imam could not be reached for comment Wednesday as he traveled to Boston to bury his brother.

“These cases are a reminder of the dangers posed by individuals radicalized through social media,” the Texas Republican said.

Police said the video shows that officers did not have their weapons drawn when they approached Rahim and that they backed up when he initially lunged at them with the knife.

Authorities quickly showed the video to African-American and Muslim community leaders. The meeting “was all about pulling the community together,” Evans said.

After the Boston Marathon bombings in 2013, Ibrahim Rahim described Jihadis who promote terror as “hell-bent on Islam’s destruction from within,” and urged fellow Islamic leaders to drive “a mass recall of the rhetoric of hate and to suppress any and all human desire to harm others based on any contrived justification.”

Ibrahim Rahim “is a great guy and preaches a very moderate form of Islam,” said Yusufi Vali, executive director of the Islamic Society of Boston Cultural Center, where Usaama Rahim briefly worked as a guard. Vali said Usaama Rahim did not regularly pray at the center and did not volunteer there or serve in any leadership positions.

Boston voter registration records describe Rahim as a student. Other records show he applied for a security guard license in Florida in 2011, but didn’t follow through. A spokeswoman said Rahim had worked for CVS since March.

Rahim’s shooting is being investigated by the Suffolk district attorney’s office and the FBI — routine for shootings involving police. The Council of American-Islamic Relations is monitoring them, spokesman Ibrahim Hooper said.

Sadiki Kambon, director of the Black Community Information Center, an activist group in Boston, called for the U.S. Justice Department to lead a more independent review.

“Why couldn’t they have just gone to his house and questioned him?” Kambon asked.