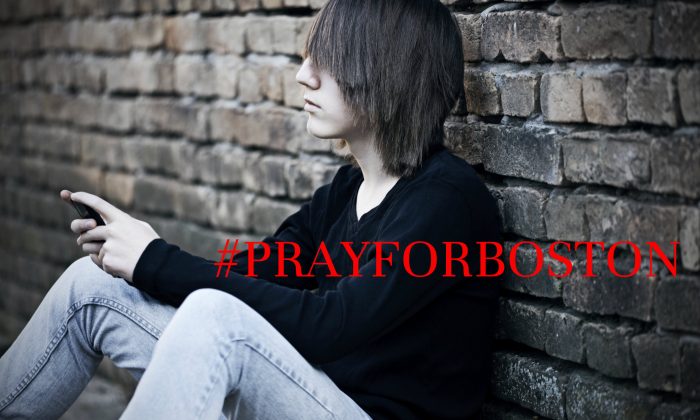 Boston Bombing: What 180 Million Tweets Tell Us About Fear

The 2013 Boston Marathon bombing lit up Twitter with more than 180 million tweets expressing fear, solidarity, and sympathy from people in 95 cities around the world.

The first large-scale analysis of fear and social-support reactions from distant communities following a terrorist attack shows the extent to which communities outside of Boston expressed their emotions by using hashtags such as #PrayForBoston and how those reactions correlated with geographic proximity, social-network connections, and direct ties to the city.

“When a community in one geographic location is attacked, it is important for government officials to be able to predict where public fears will be heightened most as a result of that attack. The findings of our study will potentially assist officials in predicting the exact manner and extent in which citizens in their own regions will react to tragic occurrences in another region of the country.

“By swiftly recognizing the heightened presence of fear as a result of occurrences elsewhere, officials within a city can respond appropriately with various measures to calm the public and reassure them that all measures are being taken to ensure public safety and well-being.”

The researchers say the study is unique because previous studies of emotional responses to terror attacks have only focused on those in directly affected areas.

For the new study, published in the journal EPJ Data Science, researchers analyzed more than 180 million geocoded tweets from individuals in 95 cities around the world. They focused their analysis on the 60 most-populated metropolitan areas in the United States as well as the 35 highest-populated cities outside of the United States.

To study expressions of fear, the researchers used content-analysis programs to search for a predetermined set of keywords—including “fearful,” “fatal,” and “terror,”—within tweets directly related to the bombing. The study also used Twitter hashtags to identify tweets reflecting expressions of solidarity and sympathy. It showed that citizens in some cities were more likely to express specific emotions based on geography and shared experiences.

The researchers theorized that the greater show of sympathy from Londoners was due to the citizens of London having endured their own terrorist attacks in the recent past and therefore relating to the sense of tragedy that Boston’s citizens were enduring.

The hashtag #BostonStrong—a variant of the #{X}strong hashtags made popular by Lance Armstrong’s Livestrong motto and the US Army’s “Army Strong” media campaign—was used to measure expressions of solidarity.

Expressions of solidarity were used most by citizens in US cities that possess close geographic proximity and have similar cultural identities as Boston. For instance, citizens in Chicago and Washington, D.C., were more likely to express emotions of solidarity due to their relative closeness in distance and personal ties with Boston.

“Our findings suggest that the immediate emotional reactions on social media are indicators of deeper feelings of connection to suffering in other communities that linger,” says Drew Margolin, assistant professor of communication at Cornell University.

“In the future, this may have implications for anticipating how communities will respond to shocking events beyond terrorist attacks, such as school shootings, natural disasters like Hurricane Sandy, or incidents like those that occurred in Ferguson, Missouri.”

According to the study’s overall findings, the extent to which communities outside of the Boston metropolitan area expressed emotional reactions to the attack directly correlated with individuals’ geographic proximities, social network connections to Boston residents, and relationships to the city of Boston.

Furthermore, reactions of fear were the most likely of sentiments to be expressed by individuals with direct ties to Boston or to Bostonians. The extent to which individuals had ties to the Boston area was the best predictor of fear and solidarity expression as well as a strong predictor of an expression of sympathy.