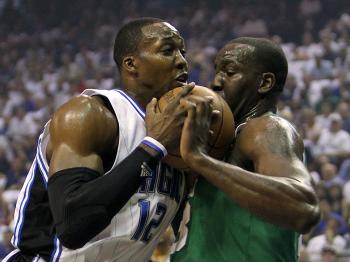 By Dan Pomerleau
Print
The Boston Celtics’ playoff onslaught was in full force on Sunday, delivering the Orlando Magic their first loss in 14 games 92–88 in Game 1 of the Eastern Conference Finals.

The Celtics never lost the lead and were up by as much as 20 points in a great defensive effort that frustrated the Magic’s superman Dwight Howard.

Ray Allen led the game in scoring with 25 points and Paul Pierce followed with 22 points.

Howard—who only missed five field goals in the entire second round series against the Atlanta Hawks to set a new playoff shooting percentage record—went 3–10 in field goals for 13 points.

The big man also committed seven turnovers under strong pressure from Boston’s Kendrick Perkins and Rasheed Wallace. The tag team prevented Howard from getting good looks at the basket and fouled him when needed.

“Our bigs definitely didn’t save fouls. We played hard in the paint and forced them to take shots from the perimeter. But we always got a hand up in their face,” Boston veteran Ray Allen told ESPN after the game.

Despite the close score at the end and a sloppy first half by both teams, the game was clearly owned by Boston.

The first half was particularly rough for Orlando, who scored just 17 points in the first 16 minutes.

Marcin Gortat gave Orlando a quick boost off the bench for Howard midway through the second quarter. The half closed 41–32 after the Celtics had been up by as much as 15 points.

The second half opened with a promising run by the Magic led by Jameer Nelson, who finished the game with 20 points.

The speedy point guard scored eight points in the first two minutes of the half—doubling his scoring in the entire first half—to help pull the Magic to within three.

But Boston went on a 12–0 run and went up by as much as 20 points in the quarter led by Pierce.

The game was competitive down the stretch with reserve man J.J. Redick and Nelson helping to pull Orlando within three points with less than 30 seconds to go.

With Carter on the line, he stuck his first free throw then missed the second one on purpose to give Nelson a flying tip in to make it a two-point game.

Carter had another great performance with 23 points.

It was a great effort by Orlando but too little too late for the seemingly rusty Magic—who’ve been off for six days.

Orlando was forced to foul Pierce on the next play, who again delivered by hitting his free throws. It goes to show just how important foul shots can be to a game.

“We dug ourselves a hole, and it was tough to get back,” Howard said.

“I honestly say we lost ourselves,” Boston coach Doc Rivers said in reference to the team’s lackluster finish of the regular season.

“I think we’ve found ourselves again.”