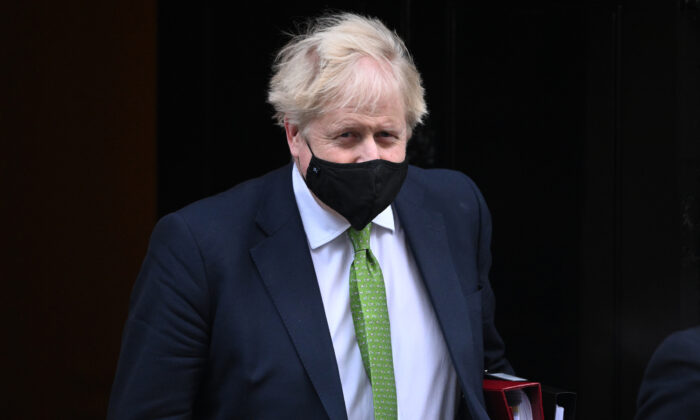 It’s normal during Prime Minister’s Questions time in the House of Commons for opposition parties to attack the UK government’s record in often-heated exchanges, but on Jan. 19, Boris Johnson suffered the strongest attacks from his own side.

The most serious of these came from former Cabinet minister David Davis, who ended his comments to the prime minister brusquely: “You have sat there too long for all the good you have done. In the name of God, go.”

Johnson was, for once, lost for words and fumbled, “I don’t know what quotation he is alluding to.” But not to be familiar that historic and fateful line is surprising for an Oxford-educated politician.

Davis was citing member of Parliament (MP) Leopold Amery’s 1940 takedown of then-Prime Minister Neville Chamberlain, which led to his resignation three days later, to be replaced by Winston Churchill.

Amery borrowed the quote from a speech delivered by Oliver Cromwell on April 20, 1653, to what was known contemptuously as the “Rump Parliament,” which presided over England for five years, achieving very little.

Three hundred and sixty-nine years later, Johnson’s defense to the loud jeers in the Commons was, “I take full responsibility for everything done in this government and throughout the pandemic.”

Those jeers did turn to cheers when he announced dramatic changes to COVID restrictions because of the declining numbers of cases and deaths—and perhaps his own falling numbers.

With immediate effect, people in the UK will no longer have to work from home, and face masks won’t be required in school classrooms as of Jan. 20 and elsewhere as of Jan. 27. COVID passes will no longer be needed at large events. People who test positive for COVID will still have to self-isolate for now, although Johnson told MPs that he doesn’t intend to renew the regulations when they end on March 24.

Health Secretary Sajid Javid added a more cautious tone later at a press conference by adding: “This is not the end of the road. …There will be future variants.”

Overall, it was a popular development, but will it be enough to keep Johnson in Downing Street? To add to his discomfort on a day he would rather not remember, one of his MPs, Christian Wakeford, chose to leave the Tories and walk across the floor of Parliament to join the Labour side.

The current crisis for the prime minister began after news of a gathering in the gardens of Downing Street on May 20, 2020, during the height of social distancing restrictions, was leaked to the media—one of many violations that occurred during the lockdowns.

Johnson was forced to make a contrite statement in Parliament offering his “heartfelt apologies” for attending, but he added he thought it was a work event and not a party, so meeting the government’s rules.

But former aide Dominic Cummings accuses him of lying. He claims that Johnson was warned against attending the bring-your-own-booze garden party and he “would swear under oath this is what happened.”

If true, that would make Johnson guilty of lying to Parliament, which should require him to resign. However, former Labour Prime Minister Tony Blair survived just such an incident over the Iraq War, when the lengthy “Chilcot Inquiry” found that he hadn’t been “straight with the nation,” but had somehow been “emotionally truthful.”

An inquiry into all government parties during the lockdowns is being led by senior civil servant Sue Gray, the results of which Conservative MPs are awaiting before making a final decision on Johnson’s future. It remains to be seen if Johnson will have to call upon the emotions of COVID-19 as his defense.

Under Conservative party rules, a no-confidence vote in the prime minister can be triggered if 15 percent, or 54, of its MPs request it. It’s thought that more than 20 letters already have been received.

No one yet has asked why, if Johnson’s apology was so heartfelt, it took 20 months; probably because everyone knows his mea culpa only happened because news of the event was recently leaked to the press.

Cummings, his accuser-in-chief, received plenty of criticism after he was caught breaching lockdown rules by driving his son to his parents’ home in the north of England from London while he allegedly had coronavirus symptoms, and as a government stay-at-home order was in place.

Seeing those in authority ignore the very restrictions they have imposed on their citizenry has shocked voters throughout the COVID crisis.

During the first lockdown, senior COVID adviser Neil Ferguson had to resign after he was discovered having an extramarital affair while recovering from COVID and clearly violating social distancing laws. This occurred just two weeks before the May 2020 Downing Street “party” and six months later, he was back working for the government.

Hypocrisy and adultery are hardly new to politics, but in June 2021, leaked video footage of then-Health Secretary Matt Hancock groping adviser Gina Coladangelo in his office left the nation stunned at his level of duplicity. He was, after all, the architect of the nation’s strict social distancing laws.

The married father of three initially refused to resign, but when Ferguson had been caught doing the very same thing a year earlier, Hancock told Sky News it was “just not possible” for Ferguson to continue as a COVID adviser, since social distancing rules “are there for everyone” and are “deadly serious.”

In the United States, House Speaker Nancy Pelosi (D-Calif.) made an illicit trip to a locked-down hairdressing salon and California Gov. Gavin Newsom attended a friend’s birthday celebration at a restaurant in Napa Valley in defiance of state restrictions. In addition, French education minister Jean-Michel Blanquer announced tough new COVID restrictions for schools while vacationing on the Spanish island of Ibiza.

One month after the Downing Street “booze party,” at the G-7 conference held in Cornwall, world leaders including U.S. President Joe Biden were filmed hugging each other at a beach barbecue, in defiance of social distancing laws.

The next day, Foreign Secretary Dominic Raab openly conceded the double standards when he told Sky News, “There has always been different principles for social entertainment and weddings than for government business.”

In Cromwell’s savage attack on parliamentarians, he excoriated the MPs who were present:

“Ye are grown intolerably odious to the whole nation. You were deputed here by the people to get grievances redressed, [yet] are yourselves become the greatest grievance.”