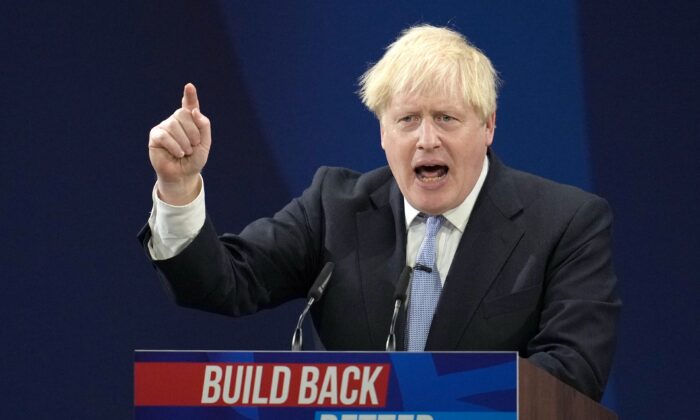 British Prime Minister Boris Johnson has been criticised by conservative think tanks and business leaders for making “vacuous” rhetoric about moving towards a “high-wage,” “low-tax” economy, which they say will only lead to further price rises and worse labour shortages.

In his speech at the Conservative Party conference on Wednesday, Johnson said he was setting out the “difficult” process of reshaping the British economy.

With labour shortages hitting supply chains, leading to empty shelves and queues at petrol stations, the prime minister defended his strategy of restricting the supply of foreign labour after Brexit, insisting his new approach would ultimately create a “high-wage,” “low-tax economy.”

The Adam Smith Institute, a free-market think tank, described Johnson’s address as “bombastic but vacuous and economically illiterate,” and “an agenda for levelling down to a centrally-planned, high-tax, low-productivity economy.”

The institute’s Head of Research Matthew Lesh said Johnson “is hamstringing the labour market, raising taxes on a fragile recovery, and shying away from meaningful planning reform.”

Lesh slammed Johnson’s focus on restricting migration as a “dog whistle,” saying: “We can both control migration and allow migrants to fill skill gaps.”

Even the Institute of Economic Affairs (IEA), a conservative think tank that supported a hard Brexit, criticised Johnson for “unnecessarily restricting the supply of labour.”

Mark Littlewood, IEA’s director general, said: “Unnecessarily restricting the supply of labour may lead to wage increases, but these will be passed on in price increases. A strategy to make things more expensive will not create a genuinely high wage economy, merely the illusion of one.”

Richard Walker, managing director of the Iceland supermarket and a Brexit supporter, complained about the government treating businesses as “the bogeyman” and an “endless sponge.”

He told the Times: “The finger is being pointed at business as the bogeyman, but it’s much wider than that. We want to pay our people as much as possible but business is not an endless sponge that can keep absorbing costs in one go.”

Zahawi denied the Conservatives—traditionally seen as the party of business—are blaming firms.

Asked on Sky News whether the Tories are “on a warpath with business,” he said: “I don’t agree with you.”

“What I would say to everybody is let’s work together,” he said. “Let’s do this together. Let’s produce that high-wage, high-skill economy, because it is do-able.”