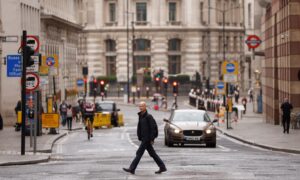 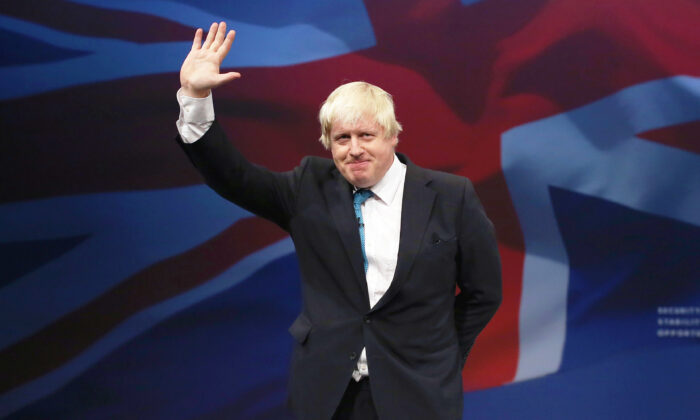 Then-London mayor Boris Johnson waves after speaking to the conference on the third day of the Conservative Party conference in Manchester, England, on Oct. 6, 2015. (Dan Kitwood/Getty Images)
UK

British Prime Minister Boris Johnson is promising increased public spending, reduced taxes and regulation, and fixing the housing market as he paints his vision for a future Britain “transformed for the better.”

Johnson said it “isn’t enough just to go back to normal” after the pandemic, which he said can be a “trigger for an acceleration of social and economic change.”

Using his own experience of contracting COVID-19 as a metaphor, Johnson said the UK, seemingly healthy, has some “chronic underlying problems,” such as deficits in skills, inadequate infrastructure, and housing shortages.

To address these problems, he promised spending in public services such as hospitals and nurses, scientific research, care homes, policing, wind power, and education, which he said is the “bedrock” to boost national productivity, and “the only way to ensure true resilience and long term prosperity.”

Johnson also said his government will change the law “to stop the early release of serious sexual and violent offenders.”

He pledged to raise spending in schools to £4,000 ($5,150) per head in primary school, and £5,000 ($6,400) per head in secondary school, and to further “explore the value of one-to-one teaching, both for pupils who are in danger of falling behind, and for those of exceptional abilities.”

For adult education, Johnson said the government is offering every adult four years of funded education, either a training course or a university degree.

Johnson also said the government would upgrade infrastructure such as rail lines, and invest £160 million ($205 million) in manufacturing wind turbines, so that “offshore wind will be powering every home in the country” by 2030.

Despite the massive public spending Johnson had announced, he said not everything can be “funded by Uncle Sugar—the taxpayer” as he took a shot at the Labour Party, his main opposition.

Responding to criticism that his government spent the cupboard bare and encroached civil liberty, Johnson said there was “simply no reasonable alternative.” He said to keep doing what his government did at the beginning of the pandemic—preempting and spending almost half of the UK’s national income—would be disastrous.

Britain must be “more competitive” in tax and regulation, he said.

“We must not draw the wrong economic conclusion from this crisis,” Johnson said as he acknowledged the importance of the private sector driven by “its rational interest” in innovation, competition, market share, and sales.

Johnson said his government will “make it faster and easier” to build new homes to ease the stress in the housing market.

He also said his government would need to deliver its campaign promises, “giving young first-time buyers the chance to take out a long-term, fixed-rate mortgage of up to 95 percent of the value of the home.”

Johnson said he believes his plan would deliver an ambitious result of creating 2 million more owner occupiers, “the biggest expansion of homeownership since the 1980s.”

“We aren’t embarrassed to sing old songs about how Britannia rules the waves,” Johnson said.

The prime minister was referring to a recent controversy in which the British Broadcasting Corp. planned to omit the words from two patriotic songs at the pomp-laden climax of a traditional classical music festival, a decision the broadcaster later reversed.

“We’re proud of this country’s culture, and history, and traditions,” Johnson said. “They literally want to pull statues down, to rewrite the history of our country, to edit our national CV, to make it look more politically correct.”

The issue of how Britain deals with the legacy of parts of its history, particularly its role in the transatlantic slave trade and the colonial period, has been hotly debated in recent months in the wake of the Black Lives Matter protest movement.

A statue of a slave trader was torn down by protesters in Bristol in June, while a range of venerable institutions such as Oxford University have grappled publicly with what they should do about controversial objects they own.