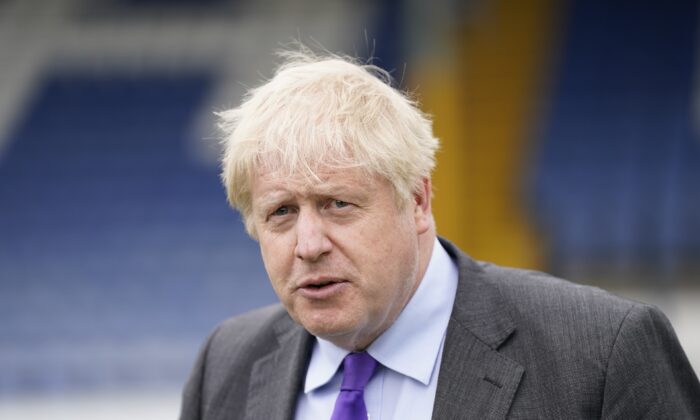 The prime minister said he knew “liberal lawyers” would try to “make this difficult,” before promising “we will get it done.”

Under the new £120 million deal with the east African country, some of the people who enter the UK illegally are to be “relocated to Rwanda to resettle and rebuild their lives,” Home Secretary Priti Patel on April 14 when she unveiled the deal.

Johnson’s policy director Andrew Griffith previously said it was hoped the scheme would be operational in “weeks, or a small number of months,” but Downing Street on Tuesday confirmed that there had been some legal challenges.

Speaking in Southampton on Wednesday, Johnson said the Rwanda deal is “a great deal.”

“Of course, there are going to be legal eagles, liberal lawyers, who will try to make this difficult to settle. We always knew this was going to happen, but is a very, very sensible thing,” the prime minister said, adding, “You need a solution” to the ongoing flow of people being smuggled into the UK in small boats across the English Channel from France.

“You need something that is going to say to those people, to those gangsters, ‘I’m sorry, but you can’t tell your customers, you can’t tell these poor people, that they’re just going to come to the UK, and they’re going to be lost in the system, because we’re going to find a way of making sure that they are going immediately to Rwanda,’” Johnson told reporters.

“I think that’s a humane, compassionate, and sensible thing to do. I’m not going to pretend to you that is going to be without legal challenges. I think I said that when I announced it, but we will get it done.”

It comes as the number of people who entered the UK illegally by crossing the English Channel in small boats this year passed 7,000.

On April 28, the UK’s Nationality and Borders Bill became law, making it a criminal offence to knowingly enter the UK illegally, punishable by up to four years of imprisonment.

People smugglers facilitating illegal entries can face life imprisonment, and those who arrive illegally in the UK who could have claimed asylum in another safe country can be considered “inadmissible” to the UK asylum system.

However, more than 500 people arrived in Kent in 16 boats on Sunday and Monday after an 11-day break amid reports of strong winds and choppy seas.

Asked if Johnson was disappointed that the Rwanda deal didn’t appear to deter illegal immigration, the prime minister’s spokesman told reporters on Tuesday that it’s “too early to judge what the situation will be long-term on this policy. ”

Asked when the success or otherwise of the plan could be judged, the spokesman said: “I don’t think there’s a fixed date … obviously, there are a number of variables we need to deal with, not least some of the legal challenges which have been talked about.”

The spokesman confirmed that the government had “received pre-action correspondence from a number of legal firms,” adding, “but we still maintain our hope to have the first flights take place in a matter of months.”

The spokesman also said that the plan was a “fully legally-secure approach that has been tested and thought through.”

Asked whether the government was waiting for the legal challenges to be dealt with before starting flights, he said that wasn’t the case, but added that “because of some of those challenges it’s hard to put an exact time on it.”

The spokesman said the intention was “to move ahead with this as soon as possible” but “we are, not unexpectedly, seeing some of these legal challenges, and in a free and democratic society we need to engage with those in the normal way.”

“But we are still planning to move ahead with the flights at the earliest opportunity,” he said.

I. Stephanie Boyce, president of the Law Society of England and Wales, said there’re questions “as to whether this scheme would comply with the Refugee Convention, whether refugees threatened with being sent to Rwanda would be able to access justice if they are mistreated.”