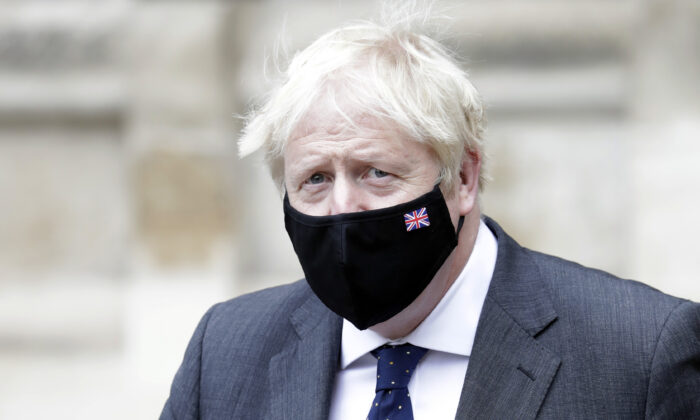 UK Prime Minister Boris Johnson promised on Monday that the government would do everything it could to prevent energy suppliers from going under amid natural gas shortages in Europe.

According to British offshore oil and gas industrial body OGUK, wholesale prices for gas have surged 250 percent since January, with a 70 percent rise since August alone.

U.S. fertilizer producer CF Industries has announced a pause of its UK production due to the price hike. The food industry, which relies on CO2—a byproduct of fertilizer production—has also warned of problems ahead of the Christmas season.

Small energy suppliers risk going under as Bulb, one of the larger companies, is reportedly looking for a bailout.

During his trip to the United States, Johnson said the natural gas shortage was due to the reopening of economies following lockdowns amid the CCP (Chinese Communist Party) virus pandemic.

“It’s like everybody going back to put the kettle on at the end of a TV programme, you’re seeing huge stresses on the world supply systems,” he told reporters travelling with him to the United Nations General Assembly in New York.

Speaking to broadcasters on the tarmac of JFK airport, the prime minister said he believes people “should be reassured” that the energy shortage problems are short-term and they are not unique to the UK.

“This is really a function of the world economy waking up after COVID,” he said.

“We’ve got to try and fix it as fast as we can, make sure we have the supplies we want, make sure we don’t allow the companies we rely on to go under. We’ll have to do everything we can,” the prime minister promised.

“But this will get better as the market starts to sort itself out, as the world economy gets back on its feet.”

His comments came as the government is under pressure to removed the price cap on energy.

Chris Burke, chief operating officer at Colorado Energy, which supplies energy to 15,000 customers, told BBC Radio 4’s “World at One” programme that the recent wholesale price surge has been “unprecedented.”

“Anyone who runs a small shop can understand, if the beans you were selling yesterday were 20p and now they are 80p a can—and you can’t change the price to the customer—it’s going to cause you problems,” he said, adding that he doesn’t know if his company will survive.

When an energy supplier goes bust, its customers are normally picked up by an alternative supplier that’s appointed by the energy regulator Ofgem.

But due to soaring costs, remaining companies will be reluctant to take on these customers.

Speaking on the BBC’s “Today” programme, Vince said the price cap “allows a margin of about 2 percent for energy companies, which is suffocating.”

“We’ve got a government stealth tax amounting to 25 percent on everybody’s electricity bill which really needs to be removed. And, of course, we’re dependent on foreign markets for oil and gas,” he said.

“We need to build renewable energy as if there’s no tomorrow. In the next 10 years we could go 100 percent energy independent in our country for electricity and gas.”

Downing Street has said that there are currently no proposed changes to the energy price cap.

“The price cap remains in place, as I say, to protect consumers from sudden increases in global gas prices and it will save them money this winter,” Johnson’s spokesman said.

Pushed on whether the cap could change between October and the next review date in April 2022, he added, “I’m not aware of any proposed change to the price cap.”

Foreign Office minister James Cleverly earlier told Times Radio the price cap was not there for “preventing any increase in prices in perpetuity” ahead of a planned 12 percent rise on Oct. 1, but was designed for “making sure that those increases were modest and predictable.”

Other than the sudden increase of demand as countries emerge from lockdowns, the shortage of natural gas has also been attributed to a cold winter last year that burnt through a large amount of stocks, and a reduction in supplies from Russia.

Asked whether the government thought Russia had been involved in manipulating gas prices, Number 10 pointed to “an increase in price of gas across Europe and globally” and said that the UK is not dependent on Russian gas supply.

“We meet half of our annual supply through domestic production and the vast majority of imports come from supplies such as Norway. I believe less than 3 percent of our gas was sourced from Russia in 2020,” a spokesman said.

Business Secretary Kwasi Kwarteng said on Sunday that the UK doesn’t have an “immediate concern in terms of [energy] supply.”