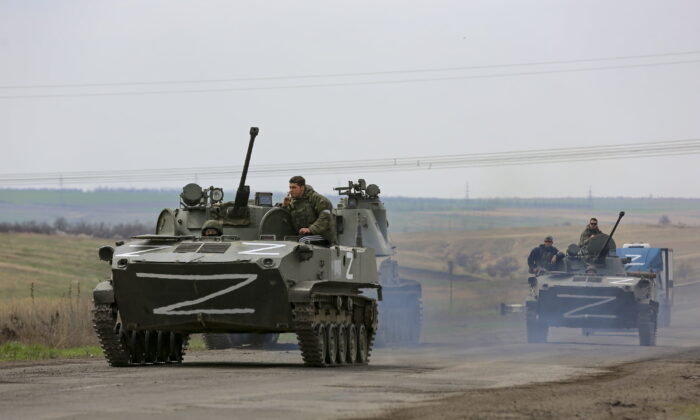 British Prime Minister Boris Johnson has been urged to help free two British nationals who were captured by Russia when fighting in Mariupol.

The family of Aiden Aslin told a British TV broadcaster on Monday that they hope Johnson will help and have something “sorted out” so the 28-year-old and his fellow Briton, 48-year-old Shaun Pinner, can be returned to their families.

Johnson previously said he hoped Aslin was “treated with care and compassion” when asked about him by his local MP—former housing minister Robert Jenrick.

Aslin, originally from Newark-on-Trent, Nottinghamshire, north England, and Pinner, originally from Bedfordshire, east England, are both members of the Ukrainian armed forces. The families said they have both been in Ukraine since 2018, long before the Russian invasion of the eastern European country.

The pair were captured earlier this month after their unit had to surrender after 48 days of defending Mariupol as they were “running out of ammunition.”

They later appeared on Russian state TV, asking Johnson to help exchange for them with Viktor Medvedchuk, a pro-Russian Ukrainian politician who was arrested by the Ukrainian secret services on April 12. It’s not clear if they were under duress.

Both appeared to have bruises and Aslin appeared to have been beaten. Their families later said they were in contact with the UK’s Foreign Office to ensure the Russian authorities “meet their obligations to prisoners of war under international law.”

Russia’s foreign ministry on April 21 said “the Russian side [was] taking care of them,” and they were “fed, watered, and given the necessary assistance. Just like other foreigners who have surrendered or been detained.”

“I would hope that, at some point, there will be a prisoner swap. However, it’s out of my hands. It is between Ukraine and Russia,” Nathan told TalkTV.

Outlining his recent phone conversation with his brother, Nathan told the broadcaster, “It was obvious that he was with the Russian people that were holding him and he was asking for me to contact Boris [Johnson] to get this prison swap done. And to keep on asking for this swap.”

Asked what he would say to the prime minister, Nathan said: “Act now when you got the time to act. You’ve got two British citizens on the line, being forced to say whatever the Russians are putting in [their] mouths at gunpoint, whether they show it on the camera or not. And it’s a moral obligation to do something about it.”

Angela added: “I would like to hope that Boris will help. And talk to the Ukraine government [and] embassy. There can be something sorted out so that these two guys can come home.”

Aslin moved to Ukraine in 2018 with his Ukrainian fiancée and now holds British and Ukrainian citizenship. He previously fought the ISIS terrorist group with Kurdish militia People’s Defense Units in Syria and northern Iraq.

Pinner’s family previously released a statement through the FCDO, rebuking Russian media’s characterisation of foreign fighters in the Ukrainian military as “mercenaries.”

They said that the former British Army soldier decided to relocate to Ukraine in 2018 “to use his previous experience and training within the Ukraine military.”

The statement said Pinner “enjoyed the Ukrainian way of life and considered Ukraine as his adopted country” where he also met his Ukrainian wife.

Foreign Office minister James Cleverly on Tuesday confirmed that Aslin and Pinner should be treated as prisoners of war.

Asked about the pair by Jenrick, Cleverly told Parliament he had discussed the issue of foreign volunteer fighters with the Ukrainian government.

“They are clear, and we are clear, that those fighting under the Ukrainian flag for the Ukrainian armed forces in the defence of Ukraine should be treated as Ukrainian military and as prisoners of war, with all the protections that the international humanitarian law affords to those individuals,” Cleverly said.

The UK government advises against all travel to Ukraine.

The UK government declined to offer an official statement in response to the pleas from the family.

A previous version of this report misstated the names of Angela Wood and Nathan Wood. The Epoch Times regrets the error.