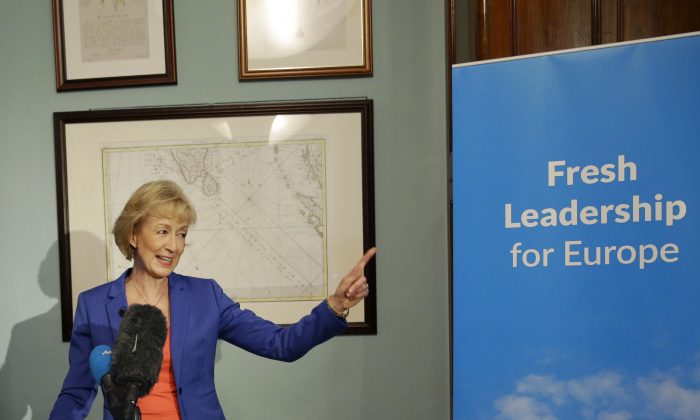 LONDON—Former London Mayor Boris Johnson threw his support behind Andrea Leadsom in the race to be Britain’s next prime minister amid the tumultuous aftermath of Britain’s decision to leave the European Union.

The Conservatives are holding their first round of voting Tuesday to whittle down the field in race to replace Prime Minister David Cameron, who announced his intention to resign after losing the vote.

Tuesday’s vote will eliminate one contender, but also measure the relative strength of the survivors including the presumed front-runner, Home Secretary Theresa May.

Johnson, one of the most prominent figures in the ‘leave’ campaign, said Leadsom has the “zap, drive and determination” to lead the country.

A fight for power has replaced the predictability of British politics in the days after the June 23 referendum. Three major political figures — Cameron, Johnson and U.K. Independence Party leader Nigel Farage — have stepped aside rather than weather the political uncertainty of leadership and negotiation with the remaining 27 nations in the trading bloc.

Top EU officials, who are wondering with whom they will negotiate, offered pointed commentary on the leaders who pushed to get Britain out of the EU — and then stepped aside.

“Patriots don’t resign when things get difficult,” he said. “They stay.”

The ramifications of leaving the single market of 500 million is roiling the financial markets. The British pound was down sharply Tuesday, as were shares in U.K. real estate companies, amid concerns that the exit from the European Union will hurt property prices.

The news comes after financial group Standard Life moved to stop trading in a commercial property fund. That followed a rapid increase in investors trying to liquidate their holdings.

Standard Life said it stopped trading to protect other investors who wished to remain in the fund.

The benchmark FTSE 100 stock index was down only 0.3 percent, but that masked big drops in property companies’ shares. Barratt Developments was down 6.2 percent, Taylor Wimpey 6.5 percent and Persimmon 5.4 percent.