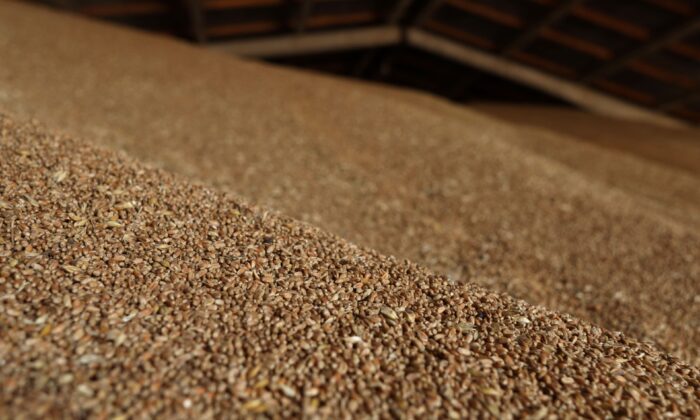 Wheat grains in a grain storage facility on a farm near Izmail, in the Odessa region, amid the Russian invasion of Ukraine, on June 14, 2022. (Oleksandr Gimanov/AFP via Getty Images)
Russia-Ukraine War

The United Nations’ plan to negotiate a safe corridor for Ukraine’s grain exports to get past the Russian blockade is probably a “non-starter,” British Prime Minister Boris Johnson said on June 25.

He urged world leaders to think about a “plan B,” and offered the UK’s expertise on remote de-mining and maritime insurance for commercial vessels to get at least 23 million tons of grain out through the Black Sea.

Ukraine and Russia are two of the biggest food exporters in the world. According to the U.N., the two countries used to provide around 30 percent of the world’s wheat and barley, 20 percent of its maize, and 75 percent of its sunflower oil.

But harvested grain has been stuck in Ukraine’s silos since Russia blocked Ukraine’s ports in the Black Sea, pushing up global food prices.

Turkey has been trying to broker a deal between Russia and the U.N. to get Ukrainian food exports out. Johnson said the UK was helping with the talks, but Russian President Vladimir Putin wants to use the food as leverage to get some sanctions lifted.

“Now the problem is that Putin is going to use that as a pretext, as a way to try and get sanctions relaxed,” Johnson said on June 25 ahead of the Group of Seven (G-7) summit in Germany.

Putin would say he’d only let the grain out if “you’ll go easy on this, this, and this,” Johnson told reporters, adding, “I don’t think that’s a runner.”

“At some stage, the world is going to have to move from plan A, which is the U.N. plan with Russian help, which I think is probably going to be a non-starter, to a plan B,” he said.

He also said the “plan B” would be “to find ways of empowering the Ukrainians to control the sea lanes from the shore with various bits of kit.”

The British prime minister offered the UK’s expertise on “two things in particular,” namely “remote de-mining” and “insurance of commercial vessels in contested waters and how to make it possible for people to take on that job.”

The Joint War Committee, a group of representatives from London’s insurance markets, added the Sea of Azov, the Black Sea, and Ukraine and Russia’s inland sea waters to its high-risk-areas list in March and April, driving up the cost of maritime insurance in the area.

Asked on June 23 whether the UK could provide sovereign guarantees for shipping insurance, Johnson told Reuters that the ministers were considering all options.

“What the UK possibly has to offer, most of all, is expertise when it comes to maritime insurance, and a lot of expertise in moving goods through should we say contested areas of the sea,” he said.

He also told the news agency that the UK was talking to the Ukrainians “at a technical level to help de-mine Odesa.”