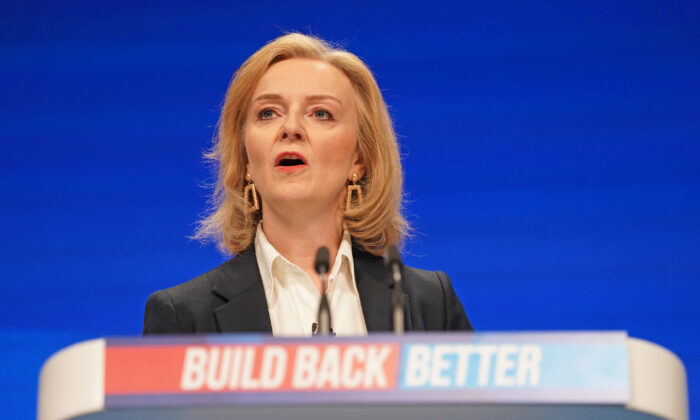 Foreign Secretary Liz Truss during her speech at the Conservative Party Conference in Manchester, England, on Oct. 3, 2021. (Stefan Rousseau/PA)
UK

Boris Johnson Not Responsible for What’s in the Shops: Truss

It’s not Prime Minister Boris Johnson’s job to make sure shops have their shelves full, Foreign Secretary Liz Truss said on Sunday amid fears that people may not be able to get their usual Christmas supplies.

The prime minister is facing pressure to solve the shortages of heavy goods vehicle (HGV) drivers and other labour shortages as a disruption in the fuel supply chain turned into a full-blown crisis after panic-buyers dashed to forecourts to fill their cars over the past 10 days.

Brian Madderson, chairman of the Petrol Retailers Association, told Sky News on Sunday that while there were only “one or two dry sites” north of London and that the “general improvement has continued,” the situation in London and the southeast remained difficult.

Speaking at a Telegraph event at the Conservative Party conference, Truss said it’s not up to Johnson to fix the problem.

“I don’t believe in a command and control economy, so I don’t believe the prime minister is responsible for what’s in the shops,” the foreign secretary said.

“This is why we have a free enterprise economy. I’m sure that the goods will be delivered into our shops,” she added.

The government offered on Sept. 26 to issue three-month visas to 5,000 foreign HGV drivers—along with 5,500 poultry workers—to alleviate pressure during this Christmas season.

After receiving complaints that foreign people would not want to come for only a few weeks, the government tweaked the plans on Friday, introducing a bespoke scheme to allow up to 300 fuel tanker drivers to come to the UK immediately and stay until the end of March 2022. The balance of 4,700 will arrive from late October and leave by the end of February 2022.

Other industries also warned of labour shortages, including a shortage of butchers that may lead to 120,000 pigs being culled and incinerated, according to media reports.

Speaking to broadcasters in east Manchester earlier on Sunday, Johnson rejected the idea of getting foreign HGV drivers to fill the gap, which is estimated to be around 100,000 drivers.

“The thing you can’t do is go back to the model of the UK economy that we had for decades, which was basically allowing low-wage, low-skilled jobs to be supported by uncontrolled immigration,” Johnson said.

The prime minister said the model led to “very low” wages and productivity, and that he believes “a high-skill, high-productivity economy” is the way forward.

Asked whether he would issue more temporary visas, Johnson didn’t rule out the option, but said it’s best if the industries could solve their own issues.

“We’ll take each step as it comes, we’re there to support industries that are having difficulties, but it is fundamentally up to them to work out the way ahead.” the prime minister told broadcasters.

“In the end, those businesses, those industries, are the best solvers of their own supply chain issues. [The] government can’t step in and fix every bit of the supply chain,” Johnson said, adding that the ministers will “keep all options on the table.”

The long-time shortage of HGV drivers has been blamed on a mixture of factors, including low pay; poor working conditions such as long, irregular hours, and a lack of toilets and other infrastructure; training and licensing costs; tax rule changes; Brexit; and the CCP (Chinese Communist Party) virus pandemic.

According to the latest ONS data for August, more than 1 million jobs were available for the first time on record as the economy reopens from CCP virus lockdowns.

Some of the vacancies could be filled as job losses were expected when the UK’s £70 billion ($94 billion) Coronavirus Job Retention Scheme came to a close on Sept. 30, although retraining will take some time.