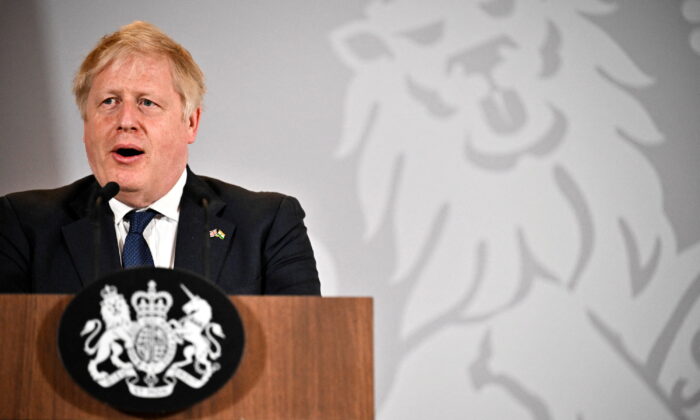 Prime Minister Boris Johnson could face another confidence vote as the treasurer of the powerful committee representing Tory backbenchers hinted at rule change in the wake of a double by-election defeat.

Sir Geoffrey Clifton-Brown said on Friday that Johnson would have to convince Conservative MPs that he shouldn’t be replaced.

After a number of missteps including the handling of payment for the refurbishment of his Downing Street flat and the Owen Paterson suspension that culminated in the Partygate saga, Johnson narrowly survived a confidence vote earlier this month with 41 percent of Parliamentary Conservative Party members rebelling against him.

Johnson’s survival meant another confidence vote couldn’t be triggered within a year, but after the Conservative Party’s lost two seats last night—to Labour in Wakefield and to the Liberal Democrats in Tiverton and Honiton—Clifton-Brown suggested the rule may change.

The Conservative MP, who voted against Johnson in the last confidence vote, told “BBC Radio 4’s “Today” programme that he believes it “would be difficult” to hold his own seat in the Cotswolds if there was a by-election now.

Asked about his thought on how the rule of not triggering two confidence votes within a year is doing, Clifton-Brown said, “I’m not going to … speculate on behalf of my colleagues as to whether we should or shouldn’t change the rules.

He said the prime minister is obviously going to set out how he plans to solve the “problems that we face in this country” to his Cabinet ministers and MPs.

“The parliamentary party has to make a judgment as to whether we think that is a satisfactory explanation or whether we should actually take steps to have a new prime minister,” Clifton-Brown said, adding he would not “speculate as to how that process will turn out.”

He also said he will consider what he hears in tonight’s Conservative Annual General Meeting and discuss the matter with his colleagues.

“We will hear what the prime minister says and then we will have to make some difficult decisions no doubt,” he said.

In 2019, Conservative MPs tried to remove Theresa May as the prime minister over Brexit six months after May survived a confidence vote by using another obscure rule in the Conservative Party Constitution (pdf), which allows 65 local party chairs to call an Extraordinary General Meeting of the National Convention.

The only agenda on the scheduled meeting was to ask May to consider to resign. The outcome would have been non-binding, but May ended up resigning three weeks before the vote meeting was supposed to be held.

In the wake of the latest by-election defeats,  Conservative Party co-chairman Oliver Dowden resigned, saying he and Tory supporters are “distressed and disappointed by recent events” and telling Johnson that “someone must take responsibility,” while Johnson vowed to “keep going.”