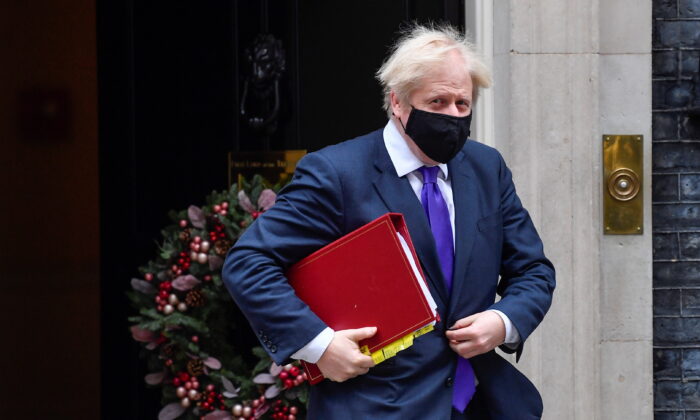 British Prime Minister Boris Johnson has hailed the UK’s vaccine roll-out as a “huge step forward” in the fight against the CCP virus, but has urged the public to remain “clear-eyed” about the remaining challenges.

Britain will begin vaccinating patients against the CCP virus this week, becoming the first country to roll out the Pfizer/BioNTech COVID-19 vaccine. People aged 80 and over, care home workers, and staff of the National Health Service (NHS) will be the first to receive the jab.

“Today marks a huge step forward in the UK’s fight against coronavirus, as we begin delivering the vaccine to the first patients across the whole country,” Johnson said in a statement released on Tuesday.

“I am immensely proud of the scientists who developed the vaccine, members of the public who took part in trials, and the NHS who have worked tirelessly to prepare for roll-out,” he said.

But he emphasised that “we must remain clear-eyed about the challenges that remain,” because “mass vaccination will take time.”

Health Secretary Matt Hancock said Tuesday will be remembered as “V-day” in Britain’s fight against the COVID-19 pandemic, which was caused by the CCP (Chinese Communist Party) virus.

But professor Stephen Powis, NHS national medical director, has warned that the roll-out of the Pfizer vaccine will be “a marathon not a sprint.”

“It needs to be stored at -70C before being thawed out and can only be moved four times within that cold chain before being used,” he explained.

The UK approved the Pfizer/BioNTech vaccine on Dec. 2, the first country in the world to do so. The first wave of vaccinations will be administered at 50 hospital hubs, and more hospitals will join in as the programme ramps up over the coming weeks.

With the vaccines, Britons can be “sure and certain” that the country “can return to normal next year in the spring,” Johnson said at a press conference last Wednesday.

Dr. Anthony Fauci, America’s top infectious disease expert, also said UK regulators had not acted “as carefully” as the U.S. Food and Drug Administration, though he later apologised and said he had “great faith” in Britain’s scientific and regulatory communities.