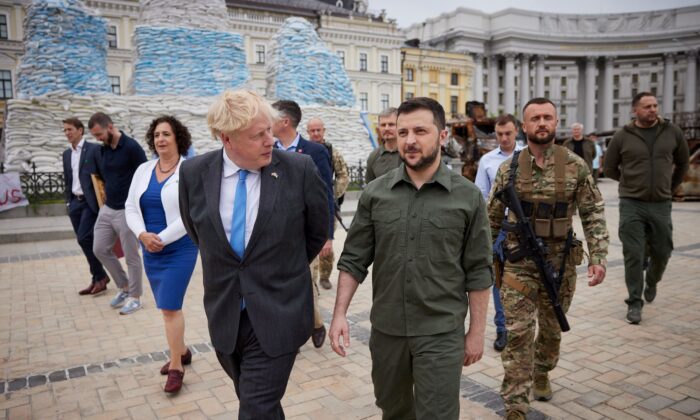 Boris Johnson Flies to Kyiv and Returns a Favor

Boris Johnson flew to Kyiv on Friday, June 17, to meet with President Volodymyr Zelenskyy of Ukraine, to demonstrate the UK’s ongoing support in its war with Russia. Specifically, he offered to re-establish a military training program, which first began in 2015.

But he was also returning a favor for Zelenkyy’s backing during attempts by Conservative MPs to remove him from office over the “Partygate” scandal.

The president sent a message supporting Johnson prior to his vote of no-confidence in the UK Parliament. Afterward, Zelenskyy said, “I’m glad we haven’t lost an important ally, this is great news.”

As Russia is now viewed by many Tories as the number one national security threat, the president’s support may have won back more than a few votes to the Bo-Jo camp.

Normally, bigger nations come to the aid of smaller ones and free nations help occupied ones, but the Zelenskyy–Johnson relationship also operates on another level. They are two beleaguered leaders looking out for each other. Indeed, it’s hard to know who’s helping who the most.

But such bonne-amie hasn’t always existed. The Ukrainian president was initially very critical of Western interference—at a press conference on Jan. 28, he accused both Johnson and President Joe Biden of exaggerating the threat caused by Russian troops on his border.

Johnson’s warnings of an imminent lightning strike by Russia to “take out Kyiv” was rejected by Zelenskyy. Johnson’s motivation was also questioned in the UK as his intervention coincided with the publication of the Gray report into illegal parties at UK government properties during the lockdowns.

Zelenskyy expressed his displeasure to a gathering of Western reporters in Kyiv: “These signals have come even from respected world leaders, who speak openly and with undiplomatic language. They say simply, ‘Tomorrow, there will be war.’ This is panic. How much does it cost for our state?”

But his views had completely changed when he appeared alongside Vice President Kamala Harris at the Munich Security Conference on Feb. 19, just weeks later, and delivered a defiant address.

He said, “Today, we have neither weapons nor security,” adding, “I want to believe that the North Atlantic Treaty and Article 5 will be more effective than the Budapest Memorandum.” (pdf)

By that, he meant being part of the West’s defensive pact with its nuclear shield would be more effective than standing alone.

Journalists chose to overlook his glaring volte-face, but at a recent Democratic fundraising event in Los Angeles, Biden reminded them of Zelenskyy’s initial hesitancy

Recalling his own hawkish stance on Russian intentions, he said: “I know a lot of people thought I was maybe exaggerating, but I knew, and we had data to sustain, he [Putin] was going in off the border. There was no doubt. And Zelenskyy didn’t want to hear it, nor did a lot of people.”

The Zelenskyy administration remembers it differently. Presential adviser Mykhailo Podolyak said, “Ukraine understood the intentions of the Russians, expected one or another aggressive scenario [and] prepared for it.” He added, “Undoubtedly, the volume of the invasion, which we saw on Feb. 24, shocked many countries, including our partners.”

Prior to the invasion, German intelligence chief Bruno Kahl had expressed doubts that Russia had made up its mind about Ukraine. He told Reuters, “I believe that the decision to attack has not yet been made.”

He did not view the build-up as stage one of a Putin Blitzkrieg of Western Europe, as some political leaders have warned. Instead, Khal believed Russia was waiting for a response to its list of demands, namely:

Zelenskyy knew this and yet he chose to travel to the Munich Security Conference on Feb. 19 and expressed his desire for Ukraine to join NATO, with the implication that NATO nuclear missiles would be located on Ukrainian soil and aimed at Russia.

His speech was guaranteed to cause panic in the Kremlin and, just five days later, Putin “let slip the dogs of war.” Yet there would be another twist in this sad story and another Zelenskyy volte-face.

After a month of bitter fighting, the Ukrainian president told his people in a 90-minute video call: “Security guarantees and neutrality, non-nuclear status of our state. We are ready to go for it.”

This was a recognition of Russia’s demands prior to its invasion, and a complete reversal of his previous stance in Munich, which was itself a reversal of his original position.

If There Had Been no Munich Speech, Would There Have Been a War?

The most plausible explanation for Zelenskyy’s change in Munich is that Kamala Harris and others in the Biden administration turned his head with promises of NATO support and membership.

This might have seemed like the best way to resolve his problems in Crimea and the Donbas region and to stop any other territorial ambitions Putin may have in Ukraine.

But his Cuban missile-type threat caused such a shockwave in Moscow that it provoked Putin to move away from his policy of intimidating Ukraine into submitting to his demands, to invading it before NATO could move in.

Although, even the Cuban analogy doesn’t fully equate to the strategic threat the Russian leader perceived.

In October 1962, President John F. Kennedy had to deal with a vulnerable fleet of 25 Soviet cargo ships operating thousands of miles from home. Whereas if Ukraine joins NATO, Putin will have on his border a fully integrated nuclear force with around 3.5 million troops and civilians.

That seems a more likely reason to attack than Biden’s recent assertion that Putin’s aim is “trying to obliterate the [Ukrainian] culture, not just the nation, but the culture.”

If the Russian president was trying to irradicate its culture, or even take over the country, he would have removed its leaders by now. But Zelenskyy is still at liberty and proving to be a formidable opponent who enjoys huge international acclaim.

Zelenskyy went for the big prize of NATO security, egged on by a Biden administration seeking credibility after its Afghanistan debacle and a British prime minister looking to save his own political career.