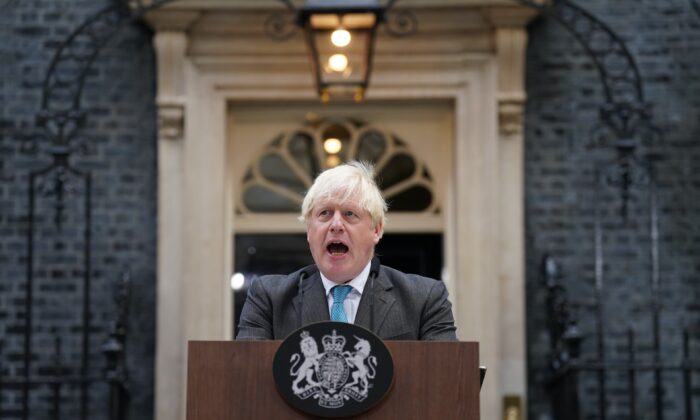 Boris Johnson has defended his record in office and has called on the Conservative Party to rally around his successor Liz Truss, who is set to take over as prime minister.

Johnson, who was forced out of office by his own party over a series of scandals, used his departure speech to boast about his actions in office, including taking the UK out of the European Union, an early vaccine roll-out during the COVID-19 pandemic, and his early support for Ukraine in its battle against the Russian invasion.

In his farewell speech outside Number 10 Downing Street, Johnson did not show any remorse over the scandals that brought him down, including “partygate,” a series of boozy gatherings held in Downing Street in violation of COVID-19 lockdown rules for which he and his wife Carrie were both fined by police.

In a sign of lingering resentment at the manner in which he was forced out, the outgoing prime minister said: “The baton will be handed over in what has unexpectedly turned out to be a relay race. They changed the rules halfway through, but never mind that now.”

He said his career is now like a booster rocket “that has fulfilled its function,” which will now be “gently reentering the atmosphere and splashing down invisibly in some remote and obscure corner of the Pacific.”

Truss, who has served as foreign secretary in the Johnson administration, became the leader of the Conservative Party on Sept. 5, after defeating her rival, former Chancellor Rishi Sunak, in a bruising leadership campaign.

In his final speech in Downing Street, Johnson said he will be offering Truss’s administration “nothing but the most fervent support.”

He said: “What I say to my fellow Conservatives—it’s time for politics to be over, folks. It’s time for us all to get behind Liz Truss and her team and her programme and deliver for the people of this country.”

He added that if his family dog Dilyn and the Downing Street cat Larry “can put behind them their occasional difficulties, then so can the Conservative Party.”

After the speech, Johnson left Downing Street to head to Balmoral Castle in Scotland for an audience with the Queen at which he will formally resign.

Shortly after that, Truss will have her own meeting with the monarch to take over the position of prime minister.