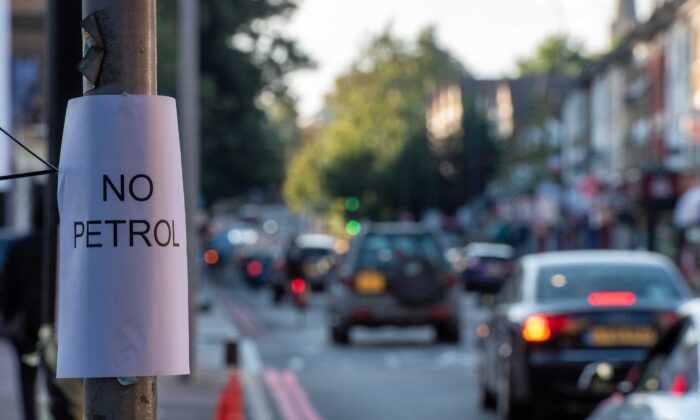 An Esso garage in Lewisham has no petrol available, in London, England, on Sept. 26, 2021. (Chris J. Ratcliffe/Getty Images)
Viewpoints

Britain’s Boris Johnson outdid himself last monty. Within hours of telling French President Emmanuel Macron, “Prenez un grip,” he was at the United Nations telling the world to grow up. More remarkable than the British prime minister’s lack of self-awareness is the fairy tale that he told about Britain becoming the Saudi Arabia of wind and inviting China to see how Britain was faring without coal. “The Glasgow COP26 summit is the turning point for humanity,” the host of the forthcoming U.N. climate conference bragged.

His could well turn out to be the most ill-judged speech by a British prime minister since James Callaghan’s press conference on his return from the Caribbean during the winter of discontent, earning him the derisive headline of “Crisis? What Crisis?”

Back home, a very different story was playing out. Households were being hit by soaring energy bills; energy suppliers were falling like flies, and the energy secretary, Kwasi Kwarteng, was assuring the nation that there was absolutely no question of the lights going out this winter, although he didn’t mention that coal-fired power stations—due for closure in three years—are still being paid to provide backup for faltering wind power. If China wanted evidence to justify its determination to keep burning coal, it could hardly do better than Britain, fast becoming the poster child of net zero—but not in the way Boris Johnson boasted to the U.N.

Britain’s energy crisis has been ten years in the making. Back in 2010, coal, oil, gas, and nuclear—so-called dispatchable generating capacity that responds to demand—made up 90.0 percent of Britain’s generating capacity. There was no solar, and wind made up only 2.6 percent of generating capacity. Ten years on, 18.3 gigawatts (GW) of coal capacity had been shut down, representing 77.4 percent of coal-fired capacity, to be replaced by 10.5 GW of wind and solar. At the same time, non-coal dispatchable capacity also fell: zero-emitting nuclear by 2.7 GW, dual-fueled and oil by 9.4 GW, and gas-fired—once billed as the bridge-generating technology—by 0.8 GW. As a result, by 2020, the proportion of dispatchable capacity in Britain’s generating mix had fallen to 66.1 percent, and wind and solar had risen to 16.7 percent.

Thanks to Covid lockdowns, 2020 was a banner year for renewables in Britain. Energy demand fell to levels last seen in the 1950s, and windy spring weather meant that renewable generation accounted for a record 43.1 percent share of power generation and hydrocarbon generation a record low of 37.7 percent. The first quarter of this year saw energy consumption fall further, but the wind didn’t blow as much. Renewable generation fell 16 percent, and hydrocarbon rose 15 percent. The lack of wind persisted into the summer and affected much of northern Europe, helping create a surge in pan-European demand for natural gas.

Although domestic production of natural gas peaked in 2000, Britain should have been well-placed to meet this extra demand. In 2013, the British Geological Survey estimated that the Bowland-Hodder shale formation, straddling a large area across the north of England, contains 1,329 trillion cubic feet of natural gas, comparable with the largest shale formations in the United States.

In November 2019, the government announced that it was ending support for fracking: “Exploratory work to determine whether shale could be a new domestic energy source, delivering benefits for our economy and energy security, has now been paused—unless and until further evidence is provided that it can be carried out safely here,” a Catch-22 that prevents all possibility of acquiring such evidence. In September 2020, the government announced a review of the offshore oil and gas licensing regime, with the aim of it leading the way on climate change and achieving net zero. “We have more installed offshore wind capacity than any other country in the world,” explained Alok Sharma, the business and energy secretary who had also been appointed COP26 president eight months earlier.

Thus Britain’s energy policy came to incorporate two fallacies that, when combined, are fatal. The first is that wind—especially offshore wind—is a substitute for dispatchable generating capacity. As Britain is learning the hard way, you can’t regulate the weather. Investing in more wind capacity doesn’t make the wind blow harder when there isn’t any wind; and if there little or no wind, wind power output will be as close to zero as makes no difference. This is so blindingly obvious that it is never articulated or recognized by energy policymakers and the experts advising them.

The second fallacy is that policies that suppress domestic production of natural gas by delaying license approvals and banning fracking cut demand for natural gas. Although electricity demand was 3 percent lower in the first quarter of this year, demand for natural gas jumped 8.1 percent, mainly because lower wind speeds increased demand for gas in electricity generation. The only thing that self-embargoing new domestic production has achieved is to hand more market power to Gazprom, the biggest gas supplier to western Europe.

While Gazprom is fulfilling its long-term contracts, it has been accused of not supplying additional gas to ease supply shortages and make the coming winter less costly for Europeans. Why should it? It’s not Gazprom’s job to make life easier for feckless, climate-posing British politicians but to maximize the selling price it obtains for its natural gas. If high energy prices force energy-intensive industries to close and inflict a miserable winter and a savage cost of living crisis on poorer Britons, that’s their problem, not Gazprom’s.

Despite the accumulating evidence, purposeful ignorance on the causes of Britain’s energy crisis—call it the Curse of COP26—persists. “The UK’s exposure to volatile global gas prices underscores the importance of our plan to build a strong, home-grown renewable energy sector,” Kwarteng tweeted. “In moving away from fossil fuels, we can insulate ourselves.”

The facts contradict the energy secretary. Last year, the average price achieved by the Big Four energy companies was £69.76 ($95.64) per megawatt-hour (MWh), a price that includes £14.07 ($19.29) per MWh of carbon taxes and emissions allowances to make for a net price of £55.69 ($76.35) per MWh. By comparison, the average price that they received from their wind and solar investments was £109.53 ($150.17) per MWh, very nearly double the net of carbon price of conventionally generated electricity for capacity that is inherently inferior because of the intermittency of its output.

Moreover, the cost of natural gas net of carbon prices would have to quadruple from its average 2020 level and stay there indefinitely for renewables to be price-competitive with natural gas generation. Even so, natural gas will still be needed—however much it costs—whenever there is insufficient wind. Kwarteng’s illusory insulation turns out to be very expensive and as unreliable as the weather.

Britain’s energy crisis is an early symptom of a chronic energy crunch that will worsen over time. Electrification of heating and transportation will increase the demand for electricity, yet dispatchable generating capacity will continue to shrink. Britain’s last coal-fired power station is due to close in September 2024. Its aging fleet of nuclear power stations will be partially replaced by the 6.5-GW Hinkley Point C nuclear project, which won’t become operational before June 2026 at the earliest—nearly two decades after it was first mooted. The only practical solution to fill the widening generating gap is to build new gas-fired power stations.

Escaping this tightening energy vice requires a radical reorientation of energy policy. Because the rogue economics of subsidized wind power and the risk of regulatory expropriation have destroyed the private-sector case for investing in the latest generation of gas-fired technology, new investment will have to be funded with the backing of the government’s balance sheet. To reduce Gazprom’s market power requires an enthusiastic commitment to fracking and exploiting Britain’s remaining offshore reserves. What, though, Boris Johnson has made clear is that Britain will not have a rational energy policy for as long as he remains prime minister—and, by the time that realization dawns, his position will be irrecoverable.