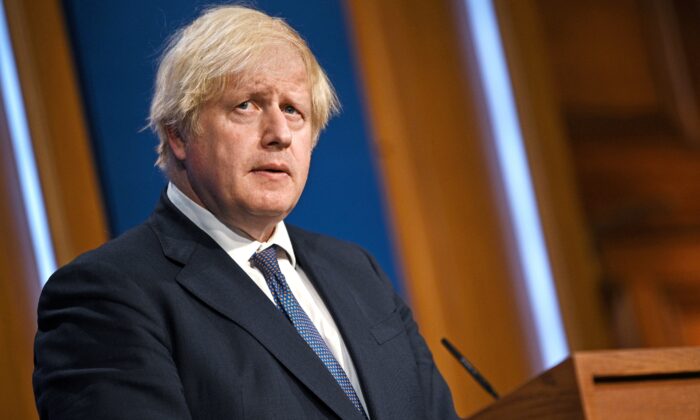 Britain's Prime Minister Boris Johnson looks on at a news conference inside the Downing Street Briefing Room in London on July 12, 2021. (Daniel Leal-Olivas/Pool via Reuters)
UK

Prime Minister Boris Johnson has been accused of adopting a “more casual” approach to Britain’s national security as lawmakers warned the Whitehall machine was unable to cope with more than one major crisis at a time.

The Joint Committee on National Security Strategy—made up of senior MPs and peers—said the fall of Afghanistan had shown the current system was “inadequate to the task.”

However, it said that reforms to the National Security Council (NSC) meant the prime minister would slash the time he spent leading its meetings by around two-thirds.

In a highly critical report, the committee said the lack of preparation for the withdrawal of international forces from Afghanistan could “only be described as a systemic failure.”

The NSC was originally established in 2010 by David Cameron with weekly meetings bringing together senior ministers and defence and intelligence chiefs chaired by the prime minister.

However, the committee said a review by national security adviser Sir Stephen Lovegrove of the way it operated would in the future result in Johnson chairing only around half its meetings.

“Most concerningly, the new model for the NSC risks becoming a halfway house: it is neither a slower-paced forum for tackling the most fundamental questions facing UK national security, nor a weekly meeting of senior ministers—convened and brokered by the prime minister—to tackle the most pressing issues,” the report said.

The committee said that it’s the prime minister’s personal investment of time and authority that lends credibility to the NSC and its cross-government structures.

“Yet under the new system, the prime minister will spend roughly 65 [percent] less time in NSC meetings than under the previous practice of weekly meetings when Parliament is in session,” the report reads.

“In our initial assessment, therefore, this is a retrograde step that suggests a more casual approach to national security.”

The report said there was already a “troubling lack of clarity” about the role and remit of the NSC, with witnesses describing “a loose, unstructured cross-government approach, with weak oversight from the centre and unclear prioritisation of risks.”

When the COVID-19 crisis broke, its structures were swiftly abandoned in favour of “ad-hoc arrangements and improvisation”—a move the committee said was “a serious mistake.”

It said that when the Afghan crisis broke over the summer, it showed the government was “unable to prepare for and respond to two national security crises simultaneously.”

With one expert witness warning of a one-in-six chance of an “existential catastrophe” over the next 100 years—from extreme climate change scenarios to nuclear conflict—the committee said there was an urgent need for reform.

The committee chair, former foreign secretary Dame Margaret Beckett, said the whole point of the NSC is that “it is supposed to prepare for, and act upon, a long-term view of our national security risks.”

“It should be above the hurly-burly of daily concerns,” she said.

“But when two events—the COVID-19 pandemic and Afghanistan—demonstrated yet again what a dangerous world we now live in, weaknesses in the structures of the National Security Council were exposed.”

Beckett paid tribute to the medical and military personnel and the civil servants who have worked hard in the two crises, before adding “their brave efforts cannot mask the fundamental need for the centre of government to get a grip on national security planning.”

A government spokesman said the national security machinery was being strengthened following the Integrated Review of foreign and defence policy earlier this year.

“The prime minister is clear that the first duty of the government is to provide security for the people of the UK, which he is absolutely committed to delivering,” the spokesman said.

“The prime minister and his government have just agreed [on] a unique trilateral defence arrangement with Australia and the United States,” he added.

“The national security machinery is being strengthened in response to the Integrated Review as well as events such as COVID and Afghanistan as necessary.”