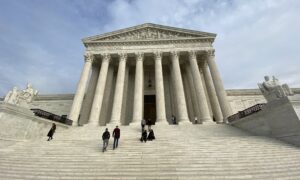 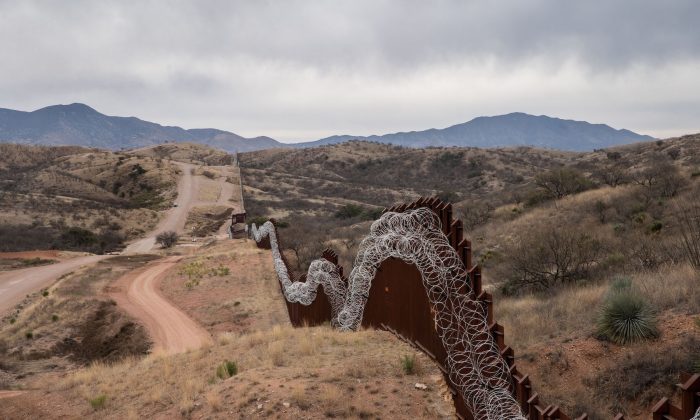 A general view of the U.S. border fence, covered in concertina wire, separating the U.S. and Mexico, at the outskirts of Nogales, Arizona, on Feb. 9, 2019. (Ariana Drehsler/AFP/Getty Images)
US News

An Arizona sheriff reported that the halting of wall construction along the U.S.-Mexico border has left areas wide open for Mexican cartels to operate.

In January, President Joe Biden issued executive orders to pause the construction of the wall that was promoted heavily by the previous administration.

But that “stopped resources and stopped construction on our border,” Sheriff Mark Dannels of Cochise County, Arizona, told Fox News. “As a result of that one area where the fence is not complete, we get five or six groups a day coming across there.” In the interview, he said that cartels are aiding in ferrying across what he called a “wide open” border area.

He added: “What it’s doing is, is forcing us back to 2019, when we had the largest, what I call, crime scene in the country to include the largest humanitarian situation going on.”

Dannels noted that the border gap could lead to a rise in cases of the CCP (Chinese Communist Party) virus that causes COVID-19, echoing warnings from members of Congress and other officials in Texas.

“And then you look at the public safety aspect of this, it’s upsetting,” he added. “It’s almost like we’re not part of this country, which is very upsetting.”

This week, Rep. Henry Cuellar (D-Texas), whose congressional district includes portions of the border, warned that Border Patrol agents are not testing migrants for the virus while warning that the situation at the border may “become” a full-fledged “crisis” if no action is taken by the White House. In a statement on Thursday, Cuellar called on the federal government to take action about how to deal with the surge in illegal migration.

And Felipe Romero, a spokesperson for Brownsville, Texas, told news outlets that 108 migrants tested positive for the CCP virus since Jan. 25—when rapid testing began. That represents about 6.3 percent of the total undocumented migrants who were rapid-tested at Brownsville’s bus station, the official said.