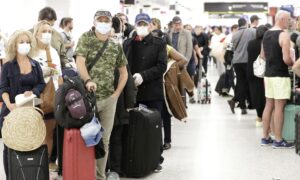 'We'd Rather Be Home': Some Snowbirds Return as Others Stay Put in Florida
0
Share Now
FacebookTweetParlerEmail
Copy Link 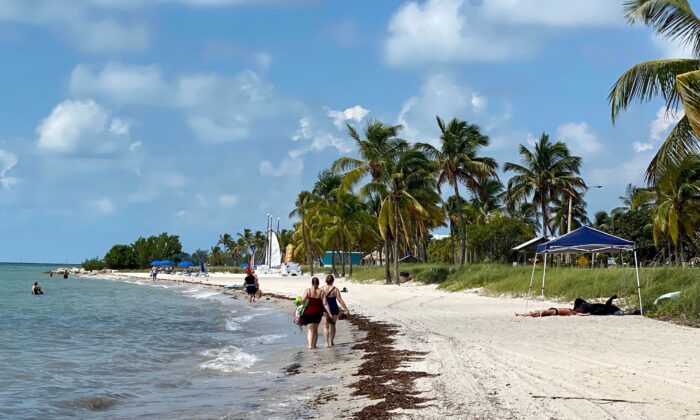 People walk along the shoreline of Key West Beach, Florida, on Sept. 18, 2020. Many snowbirds will not be travelling south this winter due to COVID-19 border restrictions. (Daniel Slim/AFP via Getty Images)
Canada

In a normal year, between 300,000 and 375,000 Canadians would spend the winter in the United States or Mexico, but the pandemic makes that unlikely this year. The ban on non-essential travel for vehicles crossing the border has been renewed until Nov. 21, and may be extended after that.

Until that changes, many snowbirds are grounded at home.

Kelly Brems discovered Catemaco in Veracruz, Mexico, while on a motorcycling road trip. For the past two winters, he and his partner Amy Simmonds have put their motorcycles in their truck, driven from their home in Carlyle, Saskatchewan, to Oklahoma, where they left the truck with a friend and then motorcycled the remaining 600 kilometres to Catemaco.

“It’s so relaxed,” Simmonds said in an interview. “For me it’s the lifestyle. It’s just a lot slower pace and it’s cheap—super cheap where we are.”

The couple rent a two-bedroom apartment for $167 a month. Cell coverage, internet, and power add less than $25 to that. For $7,000 they can make the journey in November, enjoy laid-back Mexico, and return the first week of May.

“I own a construction company and we do home renovations and new construction builds. So now that I’m older I just work six months of the year,” says Brems.

Last winter, the couple enjoyed the extravagant local Christmas and New Year festivals and the small parades they watched almost daily from atop their apartment building. But this winter will be colder, less eventful, and more expensive, as they won’t be going south due to the COVID-19 border restrictions.

“This year is going to be really hard on us, because up here we have to pay for the power and we have to heat the house, and you know just gas getting anywhere and food—it’ll definitely hit the pocketbook,” Simmonds says.

Fred Atkey plans to be in the southern United States in December. He’d prefer to drive as usual, but if he is forced to fly, he will. Travelling south is an annual ritual for the former City of Edmonton employee.

“The last couple of winters I’ve been going to St. George, Utah. That was actually one of the first places I went to. I really enjoy the area around there. … It’s a lot cheaper—way less expensive to rent property there versus Phoenix. It’s not quite as warm, but it’s still a lot better than the winters we have,” Atkey said, adding that the Edmonton winters are hard on him.

“I just can’t stand the cold anymore—the old bones don’t like it. So it’s basically just to get away from winter. Plus, there’s places for me to enjoy, to go walking and biking.”

Atkey says he won’t have to quarantine when he gets to the United States, but he will when he returns to Canada. He joined a Facebook group for snowbirds and says many are staying home.

“A lot of people are saying that they’re concerned and they’re not going to be going anywhere because of COVID. It doesn’t bother me to head down there. I know the cases are higher in states like Arizona.”

Mexican-Canadian Hernan Rodriguez has lived in Canada for 24 years. Dedication to his children in Vancouver shortens his trips south, but in his mid-30s, when he was semi-retired, he often spent months at a time in his original homeland.

“It was a dream. For a bachelor life it was the best. … I’ve been out fishing four times a week in the Caribbean. You can’t really beat that,” he says.

Rodriguez’s trip to Mexico in August was like none before due to the pandemic. Virus precautions were everywhere, he says, with infrared laser guns used to check temperatures and even chlorinated mats to walk on before entering places of business, as well as the requisite masks and hand sanitizers. Air passengers must have their finger pricked for a COVID-19 blood test before boarding flights.

Cozumel was quiet, since hotels are limited to one-quarter capacity, he says, and in Mexico City the streets were eerily void of traffic, similar to what it was like in Canada during the nationwide lockdown.

“There was 500 metres in between cars when normally it’s bumper to bumper. So it was like a movie with Will Smith where he’s the only survivor in the planet or whatever. Yeah, it was kind of freaky.”