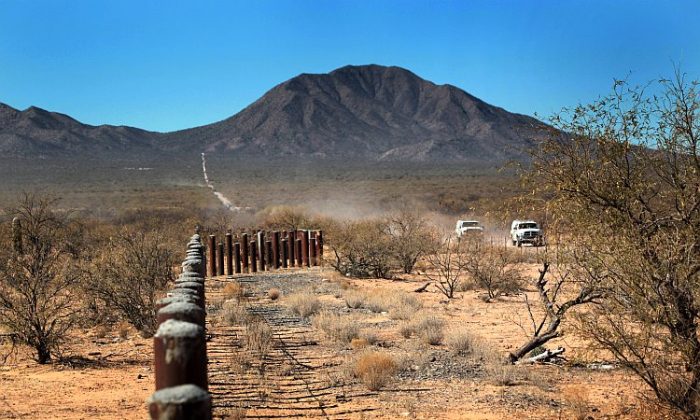 Border Patrol agents drive along the porous U.S.-Mexico border fence, which stretches through the Sonoran Desert in the Tohono O’odham Nation, Ariz., on Jan. 18, 2011. The Native American reservation, which straddles 72 miles of the U.S.-Mexico border, is a key crossing point for narcotics entering the United States. (John Moore/Getty Images)
US

U.S. Customs and Border Patrol could soon be given free reign in national parks along the border if the proposed National Security and Federal Lands Protection Act is passed.

H.R. 1505 was placed on the Union Calendar on April 17. It is designed to guard the United States against spillover violence from Mexico and quell illegal immigration. Yet the high potential cost to the environment will likely prevent it from moving any further.

“It’s really a bogus bill,” Anzelmo said, since there are already systems in place allowing the Border Patrol and Homeland Security access to federal park land when necessary.

The systems Anzelmo referred to were outlined by the Department of Homeland Security (DHS) in a July 8, 2011 statement before the National Parks, Forests, and Public Lands subcommittee of the House Committee on Natural Resources.

The statement says that CBP works closely with the Department of Interior (DOI) and Department of Agriculture (USDA) to “fulfill our enforcement responsibilities at our nation’s borders and to counter illegal cross-border activity on federal lands.”

When federal lands, such as national parks, overlap with CBP enforcement zones, environmental protection laws “may affect the tools available to agents for daily operations within those areas and may have an impact on the deployment of technology and tactical infrastructure,” it states.

It goes on to say that when challenges arise the “CBP works closely with DOI and USDA to find mutually agreeable approaches and solutions.”

The bill states, “U.S. Customs and Border Protection shall have immediate access to land under the jurisdiction of the Secretary of the Interior or the Secretary of Agriculture for purposes of conducting the following activities on such land that assist in securing the international land borders of the United States.”

These activities would include: building roads and fences, use of vehicles, installation of surveillance equipment, use of aircrafts, and deploying “temporary tactical infrastructure, including forward operating bases.”

Opponents of the bill note that there are no specific prohibitions in the bill preventing use of certain controversial technologies such as unmanned drones.

In a statement, The Pew Charitable Trusts said, “The bill’s reach is unprecedented. It would allow a single federal agency the authority to waive clean air and water laws, as well as those that protect parks and other public lands. It would leave Congress and the public without a voice, even though at stake are hundreds of popular destinations including Glacier and Big Bend National Parks, the Great Lakes, and Boundary Waters Wilderness.”

Rep. Rob Bishop (R-Utah), chairman of the House Natural Resources Subcommittee on National Parks and author of the bill, has reduced the bills scope somewhat since it was first introduced.

It used to include the whole Department of Homeland Security, but now only includes Customs and Border Patrol. It will also only apply to federal lands.

Despite these changes its potential impact is still causing concern. Those opposed to the bill are keeping it under a watchful eye.