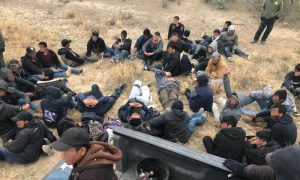 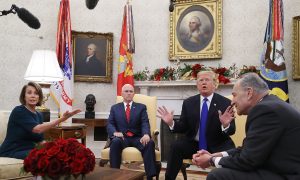 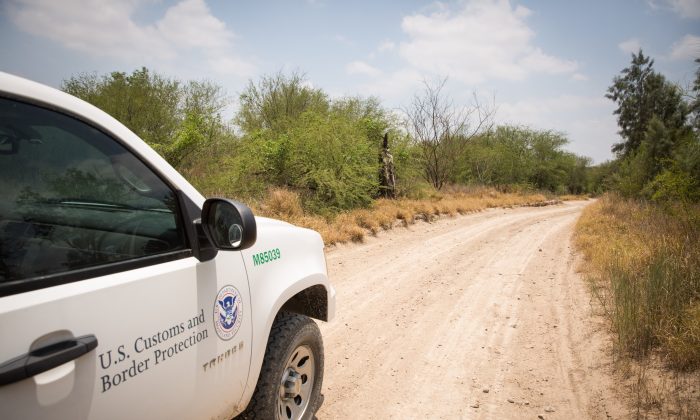 A Customs and Border Protection vehicle in the desert in Hidalgo County, Texas, on May 26, 2017. (Benjamin Chasteen/The Epoch Times)
US News

Border Patrol agents unveiled new technology they plan to start using soon along the southern border of the United States.

The towers can scan the mountains with infrared scopes and help agents detect human and drug smugglers and illegal immigrants. The units can see for miles.

The units enable agents to see two pictures at all times, one through a daytime camera and another equipped with infrared.

“It’s game-changer for them,” John Moulton, chief technology officer, surveillance, at supplier Benchmark Enterprises, of Angleton, Texas, told Fox 5. “One agent who goes on patrol can multiply his vision many, many miles.”

The units will start using them on Dec. 21.

“[With] the looming threat of the migrant caravan in Tijuana and more people potentially on the way we need to make sure we’re prepared for that,” Michael Scappechio, a Border Patrol supervisor, told 10 News.

He said the units will yield a 90 percent increase in arrests.

The units are meant to provide support to the border wall.

Border Patrol officials are hoping the technology helps cut down on the number of illegal aliens that are flooding over the border, with 12,000 people arrested in San Diego County this year alone.

During fiscal 2017, almost 400,000 people were apprehended along the southwest border after crossing illegally—averaging out to almost 1,100 per day, reported The Epoch Times. A further 124,500 turned up at ports of entry without documentation.

And in the past two months alone, more than 100,000 people have been apprehended for crossing into the United States illegally.

Illegal Immigration in the United States

Up to 29 million illegal aliens are living in the United States, according to researchers at Yale University. The researchers noted that previous estimates were all based on one survey, and they were able to figure out the true range of illegal immigrants residing in the country.

The new approach the researchers used was based on operational data, including deportations and visa overstays. They combined that with demographic data, including death rates and immigration rates. The paper examined data from 1990 to 2016.

They said the mean estimate was 22.1 million illegal aliens.

According to a 2018 report from the Center for Immigration Studies, births in 2014 to illegal immigrants accounted for 7.5 percent of the births in the United States, or some 297,000. That figure is larger than the total number of births in any state other than California and Texas.

The center said the estimated 28,000 births to illegal aliens in the Los Angeles metro area alone is larger than the total number of births in 14 states and the District of Columbia.

About 67 percent of illegal aliens who give birth aren’t insured, leaving taxpayers to foot the bill for the births. The cost for illegal immigrant births was pegged at $2.4 billion.