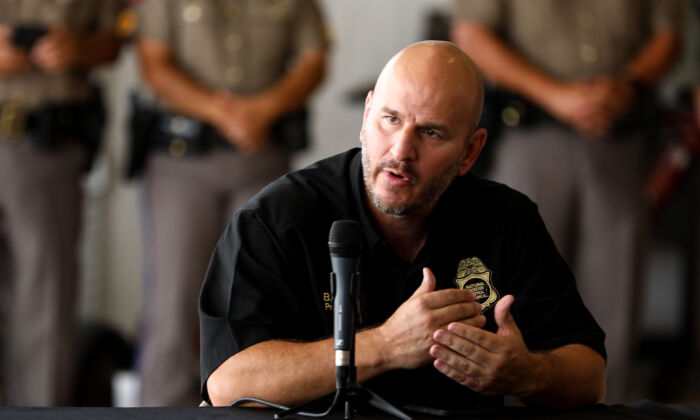 The head of the Border Patrol union says that drug cartels will seize “complete control” of the southern border once a Trump-era public health order to expel illegal immigrants is allowed to expire on May 23.

When asked by Fox News anchor Dana Perino about the “worst-case scenario” that could arise once the health order ends, National Border Patrol Council President Brandon Judd said it would be “that we just don’t have anybody in the field, that we just can’t patrol the border.”

He said the Border Patrol system is running out of capacity as overwhelmed border agents will be largely held up by processing asylum-seeking illegal immigrants, either refereeing their claims or expelling them back to their home countries.

“That’s going to give complete control to the cartels. That’s a scary situation to be in.”

Judd was referring to Title 42, a COVID-19-era policy implemented during the Trump administration in March 2020 to quickly expel illegal immigrants on public health grounds. The measure has so far blocked more than 1.7 million illegal aliens at the U.S.–Mexico border in the past two years, yet is set to expire on May 23 under President Joe Biden, given that public health conditions have changed.

According to a May 16 court document filing, U.S. border officials encountered more than 234,000 illegal immigrants at the U.S.–Mexico border in April, with 96,908 of them being deported back to Mexico under Title 42.

It topped March’s 22-year high of slightly more than 221,000 illegal immigrants and marked the fourth time that monthly border encounters have topped 200,000 under Biden.

“If he ends Title 42 policies next week, we’re going to need a much taller chart,” he wrote in a May 18 Twitter post.

Rep. Glenn Grothman (R-Wis.), the ranking member on the National Security subcommittee, said on May 17, “By empowering the Cartels instead of [Customs and Border Protection], Biden is actively threatening the health and safety of our communities.”

Rep. Diana Harshbarger (R-Tenn.) said on the same day that “only the cartels are happy” about the lift.

The Biden administration has said that it’s preparing for scenarios of up to 18,000 encounters per day when the order lifts. Both Republicans and moderate Democrats, including those in tough races for November midterms, have warned about the lack of a comprehensive plan to tackle the potential immigrant inflow at the border once Title 42 lifts.

During a visit to the southwest border in the Rio Grande Valley on May 17, Homeland Security Secretary Alejandro Mayorkas said his department is prepared for the ending of Title 42.

The country’s annual deportations have fallen dramatically under Biden. In the 2021 financial year, 59,011 illegal immigrants were deported, compared to about 185,884 in 2020 and 267,258 in 2019, according to data released by the U.S. Immigration and Customs Enforcement.

An April Convention of States Action and Trafalgar Group poll (pdf) shows that a majority of U.S. voters, including nearly two-thirds of Hispanic voters, believe that the Biden administration should close the southern border until a solution is reached.

The Biden administration has requested the federal judge to make a decision on the lawsuit by May 20 “to avoid uncertainty that could pose operational challenges,” according to judicial notice.

“The Biden administration is scrambling five days before their own deadline to end Title 42 because President Biden’s open border policies have created, in the words of Homeland Security Secretary Alejandro Mayorkas, an ‘unsustainable’ crisis for our country,” House Minority Leader Kevin McCarthy (R-Calif.) told Fox News in a statement.

Department of Homeland Security and the White House officials didn’t respond to requests for comment by press time.