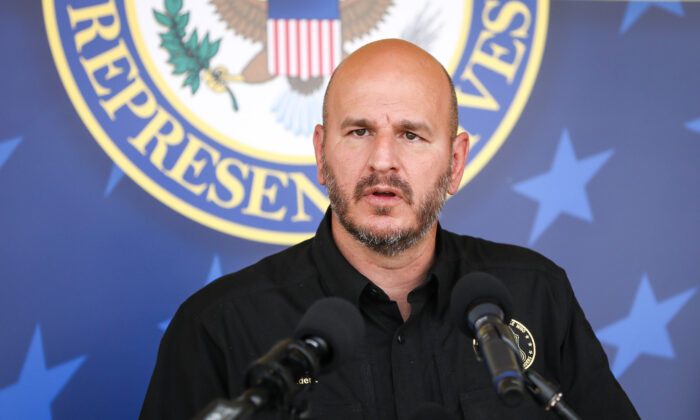 “We’re at a breaking point. We’ve got miles upon miles of border that just aren’t patrolled because we have to deal with, frankly, an invasion,” Brandon Judd, president of the National Border Patrol Council, told The Epoch Times.

“When you’re dealing with over 200,000 illegal border crossings per month, I don’t know how you don’t call it anything but that.”

Border Patrol apprehensions along the southern border have remained above 150,000 per month since March 2021, with the exception of this past January. In March, numbers show that more than 220,000 apprehensions were made.

During one night last week, Border Patrol agents apprehended 16 illegal aliens from Kyrgyzstan, seven from Kazakhstan, and a Russian within a large group near Eagle Pass, Texas, according to Customs and Border Protection.

“I mean, we’re dealing with countries all over the world, and a lot of these countries want to do the United States harm,” Judd said.

“So if you were to declare that and bring the National Guard in, and the National Guard immediately expelled people that crossed the border illegally. Why not? If the Constitution allows it—which, apparently it does—why not exercise that authority?”

Abbott, a Republican, would have to declare the border crisis an invasion to invoke the state constitutional powers to protect itself if the federal government is derelict in that duty.

Article IV, Section 4 of the U.S. Constitution states, in part: “The United States shall guarantee to every State in this Union a Republican Form of Government, and shall protect each of them against Invasion.”

Article I, Section 10 of the U.S. Constitution states, in part: “No State shall, without the Consent of Congress … engage in War, unless actually invaded, or in such imminent Danger as will not admit of delay.”

Texas is waiting for its attorney general, Ken Paxton, to write an opinion in response to a query submitted by state Rep. Matt Krause on March 28.

“The Biden Administration has been so inept or apathetic to the plight of Texas and other border states, that it very well could rise to a violation of Article 4, Section 4 of the U.S. Constitution,” Krause wrote in a Facebook post that accompanied a copy of the official letter.

“So, today, I asked the Attorney General for an official opinion on whether that violation has occurred here in Texas.”

Paxton’s office told The Epoch Times that it doesn’t have a timeline on when the opinion will be published.

Abbott has been making headlines recently by busing illegal immigrants from Texas to Washington and jamming up trade flows between Mexico and Texas to force attention to the border crisis.

However, experts are saying it’s unlikely the Mexican states will hold up their end of the bargain—which is to stop migrants from crossing illegally into Texas and to conduct their own truck inspections.

Abbott announced in early April a multipronged plan to deal with the expected influx of illegal aliens following the Biden administration’s plan to end Title 42, a pandemic-era power that enabled the rapid expulsion of many who crossed the southern border illegally.

“The Biden Administration’s open-border policies have paved the way for dangerous cartels and deadly drugs to pour into the United States, and this crisis will only be made worse by ending Title 42 expulsions,” Abbott said.

So far, Texas has sent at least six buses with illegal immigrants to the capital since April 13. White House press secretary Jen Psaki has called the bus plan a ​​“publicity stunt,” while CBP Commissioner Chris Magnus accused Texas of not “adequately coordinating” with federal officials.

Arizona Attorney General Mark Brnovich provided an opinion following a query by state Rep. Jake Hoffman, who asked what constitutes an “invasion” with regard to Article IV, Section 4 of the U.S. Constitution, as well as “actually invaded” as articulated in Article I, Section 10 of the Constitution.

Brnovich’s Feb. 7 opinion centers around those two definitions and whether the federal government has been derelict in its duty to protect.

“The on-the-ground violence and lawlessness at Arizona’s border caused by cartels and gangs is extensive, well-documented, and persistent. It can satisfy the definition of ‘actually invaded’ and ‘invasion’ under the U.S. Constitution,” the opinion reads.

Brnovich said the Biden administration has taken “unprecedented actions … to destroy operational control of the border.”

“The federal government is failing to fulfill its duty under Article IV, Section 4 of the Constitution to defend the States from invasion. The State Self-Defense Clause exists precisely for situations such as the present, to ensure that States are not left helpless,” he wrote.

As commander-in-chief for Arizona, Gov. Doug Ducey has the power to “engage in defensive actions within its own territory at or near its border,” Brnovich said. The governor has the authority to use the National Guard and militia forces.