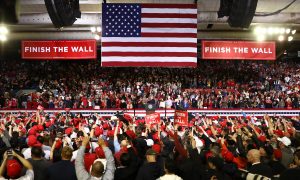 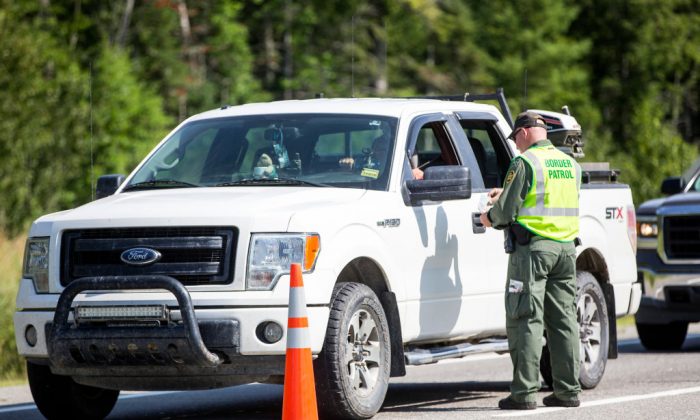 A U.S. Border Patrol agent checks identification of a driver at a highway checkpoint in West Enfield, Maine, on Aug. 1, 2018. (Scott Eisen/Getty Images)
US News

Federal authorities have shut down all highway Border Patrol checkpoints in New Mexico, re-allocating agents to deal with the influx of migrants from south of the border.

The checkpoints—all within 100 miles of the border—are meant to be a last line of defense against people seeking to enter the U.S. illegally.

That safety net has now been compromised.

“We were told to go ahead and close down all the checkpoints,” one official told Texas Monthly anonymously. “It’s really out of control, it’s bad.”

A total of six checkpoints have been closed, including all five in New Mexico, and one in West Texas, according to the Albuquerque Journal.

The move comes after U.S. Customs and Border Protection (CPB) officials announced in a press conference Wednesday extraordinary steps being taken in response to “an unprecedented humanitarian and border security crisis.”

Unusual new measures include re-assigning up to 750 Customs and Border Patrol Officers from ports of entry along the southwest border, who “will soon be supporting Border Patrol with care and custody of migrants.”

“The United States Border Patrol (USBP) continues to apprehend illegal alien families and unaccompanied children in steadily increasing numbers. To process and ensure appropriate care for those in custody, resources including personnel have been diverted from other border security priorities,” a CBP spokesperson stated on Monday, according to the Texas Tribune.

“This shifting of resources and personnel will have a detrimental impact at all Southwest border ports of entry,” the CBP said in a statement. “CBP will have to close lanes, resulting in increased wait times for commercial shipments and travelers.”

Immigration officials were cited by the Texas Tribune as saying that resources from the checkpoints are “intended as a temporary measure.”

Earlier, U.S. Customs and Border Protection Commissioner Kevin K. McAleenan told a press conference in El Paso that a dramatic increase in illegal crossings along the Southwest border was a major strain on law enforcement resources.

“The surge numbers are just overwhelming the entire system,” McAleenan said on March 27, according to the El Paso Times.

“CBP is facing an unprecedented humanitarian and border security crisis all along our Southwest Border,” McAleenan said in a statement. “And nowhere has that crisis manifested more acutely than here in El Paso Sector. Here in El Paso, we have almost 3,500 migrants in custody this morning, in facilities designed for many fewer. We had over 1,000 apprehensions on Monday. The vast majority are families from Central America.”

Arrests along the Mexican border jumped to 66,450 in February, 149 percent more than a year earlier.

The number of illegal alien apprehensions in the Border Patrol’s El Paso sector grew by about 800 percent over the past year.

Immigration officials expect that in the month of March, CBP agents will make over 100,000 illegal alien apprehensions.

If accurate, those figures will represent the highest monthly total in a decade.

“When you have checkpoints shutting down and you have huge distractions away from the core mission of border security, that puts our country in a very vulnerable position,” said Manuel Padilla, commander of the Department of Homeland Security’s Joint Task Force-West and the former head of the Border Patrol in the Rio Grande Valley, according to the Associated Press.

Meanwhile, the Democratic-led House failed on Tuesday to override President Donald Trump’s first veto, salvaging his effort to steer billions of extra dollars to erecting barriers on the U.S.-Mexico border.

Congress has approved less than $1.4 billion for a border wall. Trump declared a national emergency at the Southwest border, allowing him to shift an additional $3.6 billion from military construction projects to build the wall.

“Keeping our nation secure should be the president’s very highest priority. With President Trump, there is no question he has and will continue to carry out this priority,” Rep. Sam Graves (R-Mo.) said during Tuesday’s floor debate, according to Politico. “He has very clearly laid out the case for a declaration for a national emergency. There is a crisis at the border.”

Lawmakers voted 248-181 to overturn Trump’s veto, but that fell 38 votes shy of the required two-thirds margin.

The futile congressional effort bolsters Trump’s drive to build a wall along the boundary with Mexico, a hallmark of his 2016 presidential campaign and a priority of his presidency.