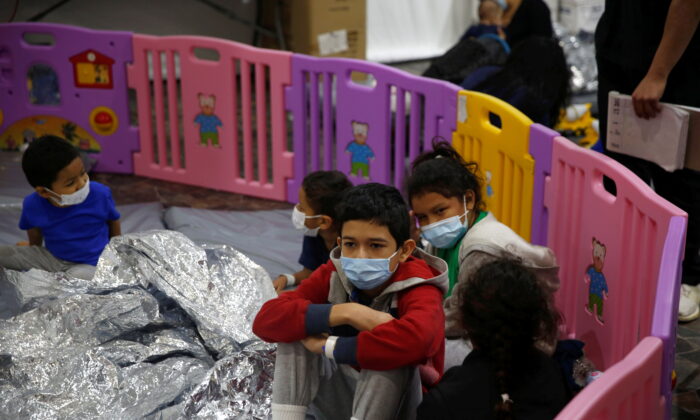 Young unaccompanied migrants, that range in age from 3 to 9, sit inside a play pen at the U.S. Customs and Border Protection facility, the main detention center for unaccompanied children in the Rio Grande Valley, in Donna, Texas, on March 30, 2021. (Dario Lopez-Mills/Pool via Reuters)
Immigration & Border Security

A toddler and an infant were recently rescued in western Arizona’s Organ Pipe Cactus National Monument after they were abandoned by illegal immigrant smugglers.

On Thursday, an illegal immigrant who was among a group of arrested border crossers alerted border patrol regarding the children’s location. An agent then discovered a 4-month-old infant and a crying 18-month-old baby at the monument. The agent gave first aid to the unresponsive infant while waiting for medical professionals to arrive.

The children were later taken to a hospital and subsequently returned to border patrol. Officials are trying to place them with the Office of Refugee Resettlement which looks after illegal immigrant children picked up without a family.

“This is cruelty. And it is gut-wrenching. I commend our agents for their quick response to this dreadful incident and to every incident in which migrant lives are at stake,” Tucson Sector Border Patrol Chief John Modlin said in an Aug. 27 tweet.

“Agents found the infant was unresponsive; thankfully, we were able to revive her and avert tragedy. The heartlessness of smugglers cannot be underestimated.”

The Organ Pipe Cactus National Monument where the kids were left behind is a dry, harsh landscape along the Mexican border that is characterized by cactuses. It is a favored crossing area for some smugglers due to its remote location.

Temperatures in the region usually soar into the triple digits. It is unclear whether the arrested illegal immigrants include the people who might have abandoned the kids.

Over the past fiscal year, the Border Patrol’s Tucson sector has seen a 12 percent increase in unaccompanied minors being smuggled over the border. Recent groups of children have come from places like El Salvador, Honduras, and Guatemala. They turn themselves in once they come into contact with border patrol.

“Smuggling organizations will bring these people and children, sometimes toddlers to these places in the middle of the desert, in the middle of nowhere,” Jesus Vasavilbaso, a U.S. Border Patrol Agent, told KGUN 9.

“The smuggling organizations sell this to the migrants saying that when you show up to the border, you just turn yourself in to Border Patrol, and they just let you in.”

There are also cases where adult illegal immigrants pose as unaccompanied minors to avoid getting expelled. On Aug. 16, agents from the El Paso Sector Central Processing Center (CPC) found three such adults in a group of 13 illegal immigrants.

On Aug. 17, three male adults were discovered posing as minors. Two more adults—a male and a female—were found on the same day among a group of unaccompanied minors. The El Paso CPC has identified more than 665 such cases during the financial year 2022.