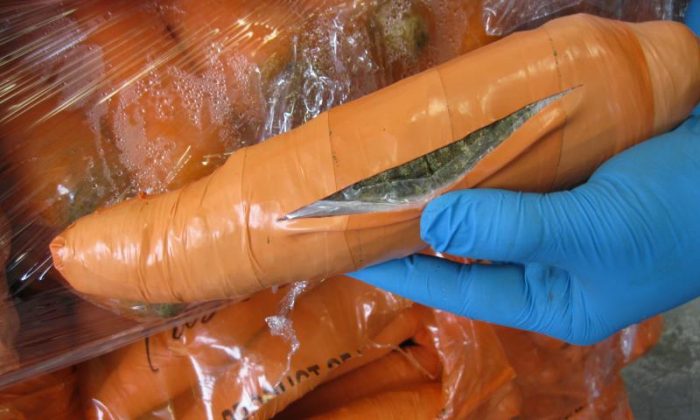 Marijuana hidden in a carrot-like package, part of a total of 2,493 pounds of marijuana seized by CBP officers (U.S. Customs and Border Protection)
Crime and Incidents

They might have caught El Chapo, but the drug trade continues. U.S. Border Officials intercepted 2,493 pounds of marijuana that were hidden inside fake carrots at the Pharr International Bridge cargo facility on Jan 10.

The marijuana were wrapped in carrot-shaped plastic packages, and mixed with real fresh carrots in a shipment. The estimated street value of the seized contraband was nearly $500,000.

“Once again, drug smuggling organizations have demonstrated their creativity in attempting to smuggle large quantities of narcotics across the U.S./Mexico border,” Port Director Efrain Solis said in a statement.

The truck carrying the shipment of marijuana was first stopped for a routine image inspection, and then it was stopped again for a secondary inspection that involved police dogs. Officers ultimately found more than 2,000 carrot-shaped bags of marijuana.

Pot isn’t the only narcotic that’s being smuggled with carrots. In November, Border Officials found 164 pounds of cocaine buried within a shipment of carrots at the same cargo facility, which is next to the Mexican border in Texas.