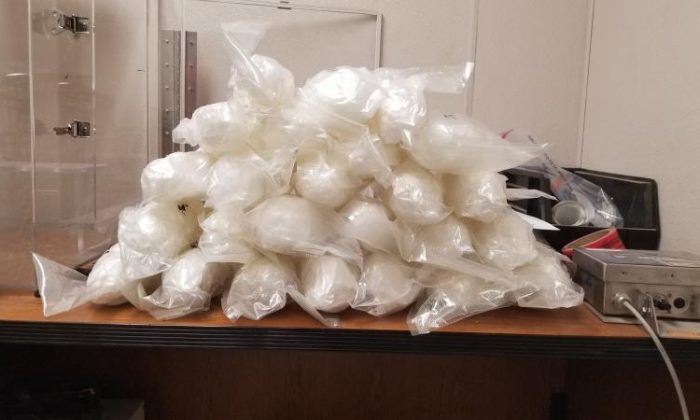 A woman suspected of smuggling methamphetamine inside her vehicle’s gas tank on July 14, 2018. (U.S. Customs and Border Protection)
US News

United States Border Patrol agents assigned to the Highway 86 immigration checkpoint in Southern California arrested a woman suspected of smuggling methamphetamine after discovering several packages of the narcotics in her vehicle’s gas tank on July 14, according to a statement.

The 45-year-old woman approached the checkpoint in her 2005 burgundy Hyundai Sonata at around 9 p.m. Her minor son was also in the car.

During the initial inspection, a canine alerted the Border Patrol canine team to the Hyundai Sonata, prompting a secondary inspection of the vehicle. Upon the second inspection, the team’s attention was drawn to the gas cap of the vehicle leading to the discovery of several sealed packages that were hidden in the gas tank.

Authorities said after examination, the substance in the packages tested positive for “the characteristics of methamphetamine.” The packages weighed a total of 26.97 pounds and had an estimated street value of $71,470, according to the statement.

The woman, who is a U.S. citizen, was subsequently turned over to the Drug Enforcement Administration. The vehicle and packages have also been confiscated for further investigation.

“This displays the level the smuggling organizations will go in order to further their criminal enterprise,” Assistant Chief Patrol Agent David S. Kim said in the statement.

The woman’s son was placed in the care of Imperial County Social Services.

The U.S. Customs and Border Protection (CBP) and Drug Enforcement Administration (DEA) around the country have worked tirelessly to catch drug smugglers coming from south of the border.

Doug Coleman, special agent in charge of the Arizona DEA, previously told The Epoch Times the volume of drugs coming into the United States is higher now than he has seen in his 30-year career at the agency, especially for methamphetamine.

“By volume, methamphetamine is the number one hard drug threat that we see,” he said.

“All the mass production of methamphetamine is happening in Mexico now, so they are just making a lot more of it and bringing it across.”

According to the U.S. Customs and Border Protection (CBP), El Centro Sector agents have seized more than 825.11 pounds of methamphetamine in the fiscal year 2018.

In 2017, more than 10,328 pounds of methamphetamine was seized by the agency, while on a typical day this year, the CBP seizes around 5,863 pounds of different types of narcotics.