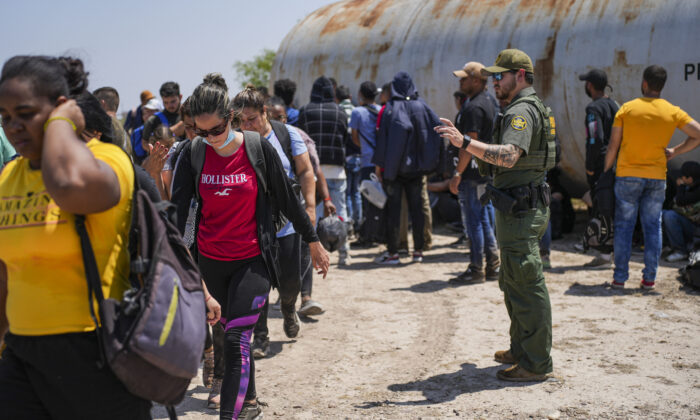 EAGLE PASS, Texas—Department of Homeland Security officials insisting that “the border is closed” seems to be having little effect at the southern border.

Thousands of illegal immigrants are pouring across the southern border every day and the Del Rio Border Patrol Sector in south Texas is a magnet for large groups, which Customs and Border Protection defines as more than 100 individuals.

More than half (363) of the illegal immigrants were single adult males, according to Customs and Border Protection (CBP).

An additional 135 were single adult females, two were unaccompanied children, and the rest were individuals within a family unit.

“At the same time, over the weekend, we had over a thousand reported gotaways,” Del Rio Border Patrol Sector Chief Jason Owens said in a May 17 Twitter video. Gotaways are illegal aliens that Border Patrol detects but doesn’t catch. The Del Rio area had more than 16,000 gotaways during April, second behind Tucson, Arizona.

During the current fiscal year, which began on Oct. 1, 2021, Del Rio Sector agents have encountered 112 large groups, which accounts for about half the large groups encountered by Border Patrol nationwide, according to a May 18 statement from CBP.

The mercury is already topping 100 degrees F in the Del Rio and Eagle Pass areas, and border agents are busy providing medical assistance to illegal immigrants with heat-related issues, as well as drownings.

“Already this morning, we’ve encountered two deceased individuals that were apparently left behind by the smuggler in the desert,” Owens said on May 17. He said a third body was found in the river. Drownings have become common, particularly near Eagle Pass where the Rio Grande is deceptively deep and swift.

“With such an austere environment, the Del Rio Sector Area of Responsibility can be extremely unforgiving. So far this year, almost 30 percent of all deceased individuals encountered by the Border Patrol have been located in the Del Rio Sector!” Owens wrote on Twitter on May 22. “The dangers are real!”

On May 20, The Epoch Times observed Border Patrol agents treating several illegal immigrants for heat-related issues, including providing fluids through an IV line under a tree next to a highway. The person was later transported to a medical facility by an Eagle Pass ambulance.

The same day, a Louisiana judge blocked the Biden administration from lifting Title 42, the public health order that is being used to quickly expel Mexicans and some other illegal aliens. The Department of Justice has said it will appeal the ruling.

During April, almost 94,700 illegal immigrants (almost 70,000 of whom were Mexican nationals) were quickly expelled under Title 42, while 107,310 were processed under Title 8 immigration law and ushered into the United States.

“The fact is that our borders are not open, and we will continue to remove those who enter our country unlawfully and have no legal basis to stay,” CBP Commissioner Chris Magnus said in a recent statement.