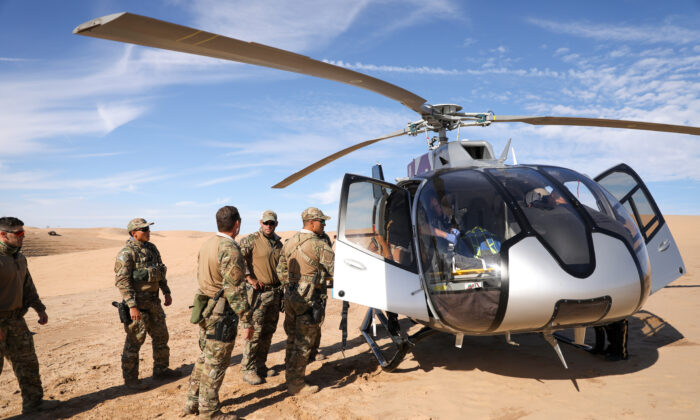 Border Patrol Could Face Shortage of Agents Over Vaccine Mandate

While hundreds of thousands of illegal immigrants cross the southern border in the worst immigration crisis in the nation’s history, the federal government could soon face a shortage of United States Border Patrol agents due to a COVID-19 vaccine mandate deadline on Nov. 22.

President Joe Biden told CNN’s Anderson Cooper at a recent CNN town hall that law enforcement officers should be fired if they don’t get the vaccine. When Cooper asked, “Should police officers, emergency responders be mandated to get vaccines? And if not, should they be—stay at home or let go?” Biden responded, “Yes, and yes.”

The Border Patrol has been encountering about 7,000 illegal immigrants a day on average for months, according to Tom Homan, who served as acting director of Immigration and Customs Enforcement (ICE) during President Donald Trump’s administration.

U.S. Customs and Border Protection (CBP) has reported nearly 1.7 encounters with illegal aliens in the 2021 fiscal year, but Homan said he expects the number to reach 1.9 million.

Homan said one Border Patrol agent is heading up a group representing several hundred others who say they will risk being fired rather than be coerced into taking getting the jab.

“I’m not anti-vax,” Homan said. “Each person has to choose on his own. Some just don’t want to do it.”

The group of agents is prepared to sue the administration if they do lose their jobs, he said.

“They won’t take the vax, so in a time of crisis, [Biden] shouldn’t force this issue,” Homan said.

“I talked to one female border patrol agent. She’s three months pregnant. She doesn’t know what the vax will do to her, and she cares, so she’s willing to lose her job,” Homan said.

He questioned the logic of forcing the Border Patrol to get vaccinated when illegal migrants are not required to be vaccinated before they’re released into American cities.

In Southern California, a reliable source close to the Border Patrol told The Epoch Times that agents are afraid to speak out about the federal employee vaccine mandate.

Hundreds of migrants who crossed the border in Texas and Arizona have arrived by the busloads every day for months at Border Patrol stations in four Southern California cities: El Centro, Calexico, Indio, and Riverside, the source said.

At the Border Patrol station in Indio, Calif., about four busloads of migrants arrive every day, the source said.

Each bus can seat up to 75 passengers which could potentially mean 300 migrants a day have entered through the Indio station since August. If all four stations in the El Centro sector are taking in that many people, it could mean more than 100,000 illegal immigrants have been moved through the region in the last few months, the source said.

A CBP spokesperson based in San Diego told The Epoch Times via email that several Border Patrol sectors have seen a “significant increase in encounters in recent months,” but did not provide specific data.

“In order to process individuals as safely and expeditiously as possible, unprocessed individuals may be transported via air or ground transportation to other sectors along the Southwest border,” the spokesperson said. “The operational need for these sector-to-sector transfers is assessed daily based on the processing capability and facility capacity of each sector and not by external influences.”

The spokesperson stated that the Department of Homeland Security (DHS) “is actively working to ensure compliance” with President Biden’s Executive Order requiring federal employees be vaccinated against COVID-19 “except in limited circumstances where an exception is required by law.”

DHS has asked all employees to certify their vaccination status by Nov. 9 or request a religious or medical exemption.

“CBP stands ready to address any potential increase in migrant encounters as we work to ensure safety and security of our borders, while managing a fair and orderly immigration system,” the spokesperson said.

“Like with migrant surges in the past, the U.S. Border Patrol is fortunate to have dedicated law enforcement professionals who remain resilient as we seek to improve enforcement efforts along the border. Day in and day out, our Border Patrol agents continue to meet the need to protect our nation’s border as well as process migrants safely and expeditiously,” the CBP spokesperson said.

Though the Obama and Biden administrations haven’t abolished ICE and the Border Patrol, they both “crippled” the mission of both agencies and morale has sunk to new lows, Homan claimed.

“I’ve talked to hundreds of Border Patrol agents. I’ve been down to Del Rio and Rio Grande several times,” Homan said. “I haven’t talked to one Border Patrol who has any respect for the President or the Secretary. They feel like they’ve been abandoned. … They’re fed up.”

ICE detentions are way down, and the agency made the lowest number of arrest removals in the history of the agency in September, he said.

ICE officers can no longer arrest someone for being in the country illegally, Homan said.

“An illegal alien can walk up to an ICE officer today and say, ‘I’m here illegally. I’ve been here for a year. I even got an order from an immigration judge saying I must leave, and I didn’t leave. I became a fugitive,’ and ICE has to walk away,” he said.

The mainstream media is trying to deflect attention away from the border crisis by portraying Border Patrol agents “as the bad guys,” the source said.

“It’s horrible that they’re being portrayed by the media not having empathy or sympathy for migrants or anyone coming to claim asylum. Everybody has empathy for that, including Border Patrol,” the source said. “If they’ve got a certain angle, they run with it and that’s not right. That’s not fair to every agent that’s really trying to protect the citizens and even the migrants.”

Though 557 migrant deaths were reported at the southern border in the 2021 fiscal year, according to CNN, Homan said Border Patrol agents save thousands of lives.

CNN has reported there were 12,854 Border Patrol rescues this past fiscal year, “far surpassing the previous four years,” and more than doubling the previous high in 2019 of 5,335 rescues.

“The Border Patrol saved over 8,000 lives this year—over 8000 and still counting this calendar year,” Homan said. “They’ve pulled people out of the river, they saved people in the desert—over 8000 saves.”

“I can tell you what they’ve seen every day this year has been devastating to them. It’s taken a toll on them as mothers and fathers or sons and daughters themselves,” Homan said.

Many Border Patrol agents bring their own kids’ toys to facilities where immigrant children are held while their parents are detained, he said.

When Homan was Border Patrol agent, he would often encounter migrants who were tired and hungry and crossing the border illegally and offer them food.

“I’d give them my lunch,” he said. “And that happens still to this day.”

“I’ve been down to Rio Grande Valley five times this year,” Homan said. “The only humane thing on that border are the Border Patrol agents—how they treat these families and children.”

Homan joined the Immigration and Naturalization Service (INS) in 1984 and worked as a Border Patrol agent, investigator and supervisor before he was appointed Executive Associate Director of ICE in 2013 and acting director of the agency in 2017.

Back of the Line

With the system clogged with increasingly more asylum claims, people who are going through the immigration system legally are pushed to the back of the line, Homan said.

On a recent trip to New York City, Homan’s driver, an immigrant from Africa, recognized him and told him he came to the U.S. as a student, became a permanent resident, and then a citizen.

“He’s been trying for eight years to get his wife and three kids over here,” Homan said.

The man was frustrated with “doing things the legal way,” because he’s paying immigration fees and taking the proper steps while he sees families cross the border illegally and claim asylum, Homan said.

Those who falsely claim asylum and jump to the front of the immigration line are hindering those with legitimate asylum claims, he said.

“That’s the frustrating thing,” Homan said. “There are people in this world that really do need asylum here because their governments are persecuting them and torturing them, but they’re taking a backseat.”