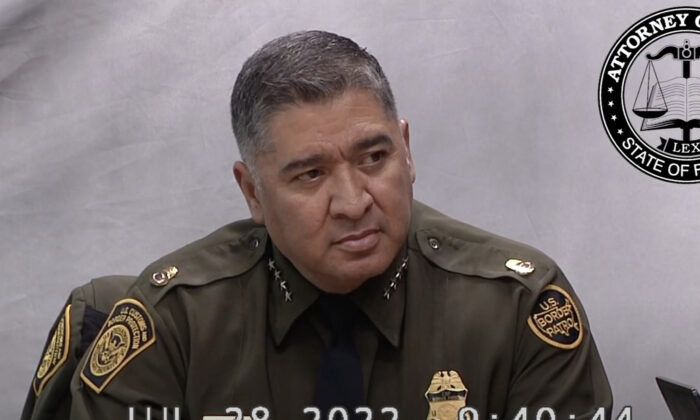 Border Patrol Chief Raul Ortiz testifies to the Florida attorney general’s office as part of a lawsuit the state has brought against the federal government, in Washington on July 28, 2022. (Screenshot/The Epoch Times)
Immigration & Border Security

The U.S. southern border is in crisis largely because of a lack of consequences being applied to most illegal aliens, U.S. Border Patrol Chief Raul Ortiz says.

“In my experience, we have seen increases when there are no consequences,” Ortiz said on July 28 during a deposition for a lawsuit against the federal government brought by Florida Attorney General Ashley Moody.

His comments are a departure from statements made by Department of Homeland Security (DHS) Secretary Alejandro Mayorkas, who has repeatedly said that the border is closed and that no crisis exists.

“It’s not just that people are walking across—across the border,” she said. “That’s not how it works.”

At current levels, Border Patrol agents are apprehending an average of 6,000 people each day who are walking across the southern border illegally, according to Customs and Border Protection (CBP) data.

Agents are on pace to apprehend more than 2 million illegal aliens during the fiscal year that ends on Sept. 30. Border Patrol agents have arrested 66 illegal aliens along the southern border who are on the U.S. government’s terrorist watchlist and 9,381 convicted criminal aliens.

Ortiz said that as long as the administration isn’t detaining or removing most illegal immigrants, the numbers will increase.

“There is an assumption if migrant populations are told that there’s a potential that they may be released, that yes, you can see increases,” he said.

He said migrants had an “unfavorable view” of Trump-era immigration policies, but since Joe Biden was elected president, unprecedented numbers have entered the United States due to the perception that they’d be released and able to stay indefinitely.

Ortiz said that economics is a consistent driver of illegal immigration.

In the first 10 months of this fiscal year, hundreds of thousands of illegal aliens have been released into the United States, pending their immigration court proceedings, according to CBP data.

Through the 1952 Immigration and Nationality Act (INA), Congress mandated that all inadmissible and illegal aliens be detained until their status is determined, after which they are either deported or granted entry with a legal status.

Parole is an exception to this and, although it’s not a legal status, it permits a one-year entry on “a case-by-case basis” for “urgent humanitarian reasons or significant public benefit,” according to the INA.

In the first 10 months of this fiscal year, CBP mass-released more than 252,300 illegal aliens under its new “Parole+ATD” category. ATD is an alternatives to detention program, which is acting as a workaround of the legal requirement to detain illegal aliens.

Under ATD, Immigration and Customs Enforcement (ICE) issues the illegal alien a trackable cell phone (or an ankle bracelet) that he or she can use to check in with the agency on a regular basis.

Under parole status, illegal immigrants don’t have to provide Border Patrol with evidence of credible fear for asylum and are permitted entry without any preconditions, except a quick background check in the U.S. crime database.

The DHS’s intention appears to be to provide illegal immigrants with the quickest pathway to being released into the United States.

Ortiz said a current focus of the Border Patrol is to find ways to process and release illegal aliens even more quickly using an electronic system. In some locations, the electronic system cuts processing times in half, he said.

“We are able to take biometrics in the field and determine immediately whether somebody has been apprehended previously, whether they have a criminal record, and whether they are a threat to our national security or to our officers,” he said.

He said agents in Yuma, Arizona, are now using a mobile intake system 100 percent of the time. The agency’s plan is to expand the practice to all U.S. land borders.

In addition, Ortiz said his agency is set to reduce its use of “expedited removal,” which is an accelerated procedure to remove illegal aliens.

ICE’s detention space has been reduced in recent years from 51,379 beds in 2018 to its current count of 30,000. Biden’s fiscal year 2023 budget asks for Congress to shave an additional 5,000 detention beds from ICE facilities, as well as to eliminate all 2,500 family beds.

The Florida lawsuit, which is set for trial in January 2023, accuses the Biden administration of violating immigration law and the Constitution. It wants the court to issue a permanent injunction compelling the administration to follow immigration law, cease using the Parole+ATD pathway, and detain illegal aliens until their cases are decided.

Over an eight-month period ending in July, nearly 40,000 illegal aliens who provided a Florida address and placed into the newly created Parole+ATD program failed to check in with ICE, Moody said in a statement.

“The federal government now has no idea of their location or activity—even though most of them are legally inadmissible,” he said.