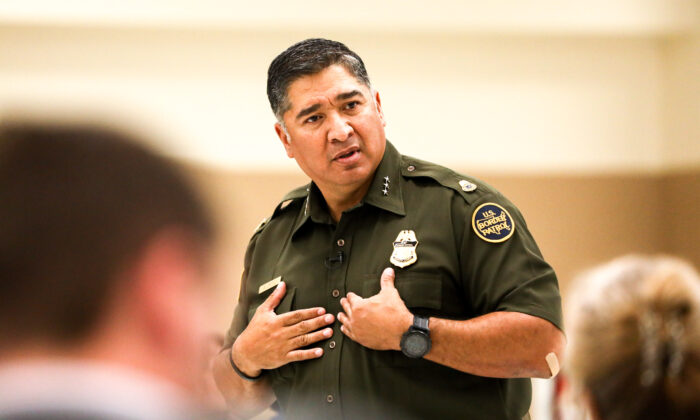 Border authorities are concerned the crisis at the U.S. southern border is going to get worse this spring due to the likely withdrawal of Title 42, a policy enacted during the Trump administration that enables border officials to expel illegal immigrants under a public health emergency.

Raul Ortiz, the head of the U.S. Border Patrol, told CNN that officials expect as many as 8,000 illegal immigrants on average daily, noting that this staggering number “will probably become the norm over the next 30 to 45 days.”

Ortiz also detailed that 350 additional agents will be brought in to assist with the crisis as officials intend to build more facilities to accommodate new arrivals.

“We’re managing a flow that’s significant,” he told the network, saying the expected surge is “going to put an additional strain” on border officials and facilities.

As of Tuesday, facilities across the U.S.-Mexico border are already holding over 16,000 illegal immigrants in detention and are over capacity, Ortiz noted. This fiscal year, which started in October, there have already been 940,000 arrests.

In mid-March, the Biden administration announced that it will potentially bring changes to the Trump-era Title 42 policy, saying there is no longer a serious transmission danger of COVID-19 in the United States in relation to illegal immigration.

The move has been criticized by some top officials, including Arizona Democrat Sens. Kyrsten Sinema and Mark Kelly, who warned Biden against ending the border restrictions policy without a “comprehensive plan” in place.

“We write to you to express great concern about the lack of a specific plan from your Administration with respect to potential changes to the Title 42 Public Health authority, which the [DHS] has relied on at the border during the coronavirus pandemic,” the senators wrote in a March 24 letter (pdf) to Biden.

“Given the impacts that changes to Title 42 could have on border communities, border security, and migrants, we urge your administration not to make any changes to Title 42 implementation until you are completely ready to execute and coordinate a comprehensive plan that ensures a secure, orderly, and humane process at the border.”

The latest figure made public on March 15 is the highest number of arrests in the month of February since 2000.

Since Biden took office in January 2021, he and his administration have relaxed or ended various Trump-era immigration policies, including curbing the use of expulsion powers and cutting deportations.

Immigration arrests started ramped up the month after Biden was sworn in and have remained at unprecedented levels. The number of illegal immigrants encountered by agents at the southern border in Biden’s first year in office has seen numbers not documented in decades.