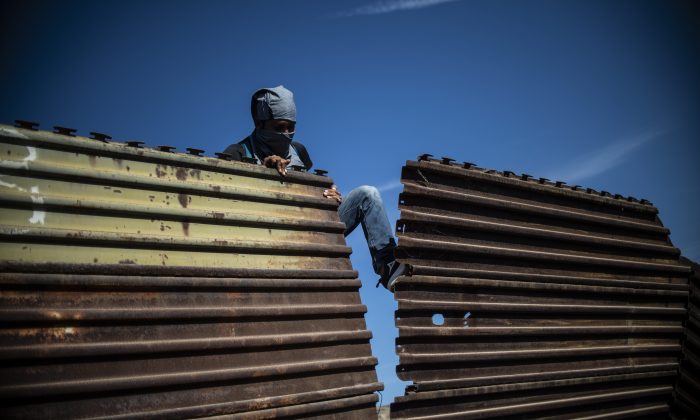 Existing fencing was 'quickly torn apart' by estimated 1,000 migrants who stormed the US border on Sunday
By Petr Svab
biggersmaller
Print

After some 1,000 Central American migrants attempted to break through the U.S.–Mexico border in Tijuana near San Diego, a senior U.S. Border Patrol agent said such places where the border fencing could be readily overwhelmed need a wall.

“Without a doubt we could use a wall in an area like that,” Brian Hastings, deputy chief of law enforcement operations, told The Hill on Nov. 26.

Long parts of the fencing are made of “landing mat,” corrugated steel used as helicopter landing pads in the Vietnam War and installed on the border a quarter-century ago.

“It is certainly out of date and does not meet our requirement for what we need with a wall,” Border Patrol Chief Carla Provost told Fox News on Nov. 26.

The migrants came in caravans mostly from Honduras, El Salvador, and Guatemala. On at least two occasions on Nov. 25, they were spotted breaking through the fences.

At one spot, a group of migrants found or made a gap between the old corrugated fencing and the newer anti-ram fence, where they were repelled by U.S. law enforcement using tear gas.

On another occasion, a group of migrants climbed over and yanked down a part of the fence.

“[It] was quickly torn apart, if you will, by several of the subjects there, who were also throwing rocks and projectiles at our agents,” Hastings said.

Mexico Interior Ministry stated it will track down and deport anybody who was part of the group crossing into the United States illegally.

Rodney Scott, the chief Border Patrol agent in San Diego, said on Nov. 26 that authorities had arrested 42 people. The vast majority of those assembled at the border were economic migrants who would not qualify for asylum, he told CNN, adding that there were few women and children.

“What I saw on the border yesterday was not people walking up to Border Patrol agents and asking to claim asylum,” Scott said.

President Donald Trump called on Nov. 26 for Mexico to deport the migrants back to their countries.

“Mexico should move the flag waving Migrants, many of whom are stone cold criminals, back to their countries,” he wrote on Twitter. “Do it by plane, do it by bus, do it anyway you want, but they are NOT coming into the U.S.A. We will close the Border permanently if need be.”

He also repeated his call on Congress to approve funding for a border wall, a signature campaign promise of his. Congress so far passed $1.6 billion for border fencing in the 2018 budget with possibly more in the 2019 one, but Trump would prefer to have the wall built in one go.

His administration previously requested $18 billion for the wall, while House Republicans proposed $25 billion. Trump has previously said he’d be willing to shut down the government over the border security funding.

Hastings said Border Patrol is arresting about 2,000 people a day regardless of the caravan. In fact, a similar incident happened exactly five years ago in the same area when a group of about 100 rushed across the border in Tijuana, hurling rocks and bottles at Border Patrol agents, who forced them back to Mexico with pepper spray and other “intermediate use-of-force devices,” The San Diego Union-Tribune reported at the time.

The caravans, however, add an element of organization that appears to be unprecedented.

About 6,000 migrants are gathered in Tijuana and another 2,000 in the Mexicali area, some 75 miles east of Tijuana, as several of the caravans reach the border. Several thousand more are still expected to arrive.

“We have not seen a caravan in the past that is so willing to use violent methods and force, sheer numbers, to overwhelm and basically get what they want,” Hastings said.

Most of the migrants are military-aged men looking for jobs or better-paid jobs, based on interviews conducted by The Epoch Times. Some of them mentioned the high crime rates in their home countries, others stated they embarked on the journey for personal reasons.

The interviewees mostly said they were expecting to apply for asylum in the United States, despite the fact that asylum is only allowed for people escaping certain kinds of persecution. Only 9 percent of Central American migrants who claim asylum at the border are granted it by an immigration judge, according to the Justice Department.

The caravans appear relatively well organized, especially the first one that had a group of people in reflective vests corralling the migrants on roads. On one occasion, one of the organizers was recorded inviting people to board a semi-truck in southern Mexico. On another, the migrants were apparently being transported in charter buses from a Mexican rental company.

Instigators of the caravans appear to be targeting U.S. immigration policy, trying to weaken the Trump administration and the United States, according to Col. Fred Peterson, former chief public affairs officer of Joint Task Force North, the Defense Department’s counter-drug and anti-terrorist operation.

“This is a very well-funded operation,” he told The Epoch Times. “It’s not spontaneous at all.”

The migrants themselves are being exploited for political purposes, he said. “They’re just props in a political, staged play.”

He anticipated that the instigators would intentionally put the migrants in dangerous situations so as to create an incident that could be weaponized against the United States.

“I would expect them to stage an event where innocents are intentionally killed,” he said.

According to U.S. Vice President Mike Pence, Honduran President Juan Hernández said the caravan was organized by leftist organizations and financed by Venezuela.

One of the caravan organizers was Bartolo Fuentes, a former lawmaker for the Liberty and Refoundation (Libre) party, which controls almost a quarter of the Honduran legislature and advocates socialism. Fuentes was detained in Guatemala and returned back to Honduras.

Correction: A previous version of this article incorrectly identified Brian Hastings as the Border Patrol Chief; it also misstated the amount and nature of border security funding approved by Congress. The Epoch Times regrets the errors.