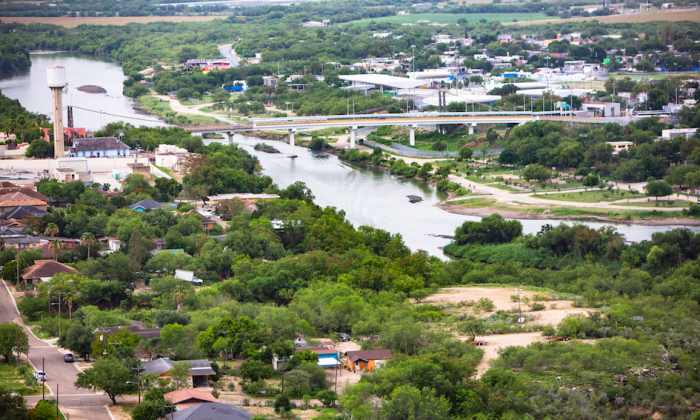 An aerial view of the Rio Grande separating the Texas city of Roma (L) and the Mexican city of Ciudad Miguel AlemÃn on May 30, 2017. (Benjamin Chasteen/The Epoch Times)
Crime and Incidents

Border Patrol agents and local law enforcement have dismantled several stash houses along the southwest border in the last four weeks. Most of the houses were in the Rio Grande Valley in Texas, the busiest sector for illegal border crossings and the second-busiest for drug trafficking.

Stash houses are used as staging points for hiding and transporting illegal aliens, narcotics, and other contraband after it is smuggled across the southwest border from Mexico.

“Human smuggling is a problem that plagues all communities on the border,” said Del Rio Sector Chief Patrol Agent Felix Chavez in a July 3 statement.

“Unfortunately, this problem is compounded by the large profits that draw individuals to join criminal smuggling organizations. We remain committed to seeking out, identifying, and bringing to justice those who callously break our nation’s laws and jeopardize human lives.”

Agents discovered a stash house on June 28, one mile from the Mexico border in Eagle Pass, Texas.

A total of 21 people were apprehended, including two suspected smugglers, according to Customs and Border Protection (CBP).

According to court documents, Alexis Emanuel Gutierrez-Rodriguez acted as a foot-guide used to smuggle the illegal aliens into the United States; and, 31-year-old Adrian Jose Flores stated that he was paid $400 to transport the illegal aliens to the stash house.

The smuggled individuals, some of whom had previously been removed from the country, were charged with being illegally present in the United States, according to CBP.

On June 28, local police and Border Patrol arrested 62 illegal aliens in a stash house less than 12 miles from the border in Rio Grande Valley.

The illegal aliens were comprised of men, women, and unaccompanied children from Mexico, Guatemala, Honduras, El Salvador, and Nicaragua, according to CBP, which added that all subjects were offered medical assistance.

Another bust on June 19, revealed seven illegal aliens and several bundles of marijuana from a stash house in Laredo, Texas.

Ten others, illegal aliens from Mexico, were apprehended on June 13 in a Douglas, Texas, home without air conditioning that was littered with trash, decaying food, and human feces, according to CBP.

On June 10, Border Patrol agents and local law enforcement discovered 50 illegal aliens in a stash house in Mission, Texas. A further 109 illegal aliens were found in three additional stash houses in Donna, Alamo, and Edinburg, Texas, the next day.

The illegal aliens, comprised of men, women and unaccompanied children, were from Honduras, Guatemala, Mexico, Ecuador, El Salvador, Nicaragua, Ecuador, and Belize, according to CBP.

“Human smuggling is a violent criminal enterprise that puts the safety of our communities and our country at risk,” said Border Patrol Acting Deputy Chief Scott Luck in a June 25 statement.

“Attacking this problem is a top Department of Homeland Security priority.  We are committed to using the wealth of resources, technology and expertise at our disposal not only to disrupt the current activity, but to identify and dismantle the criminal organizations behind it.”