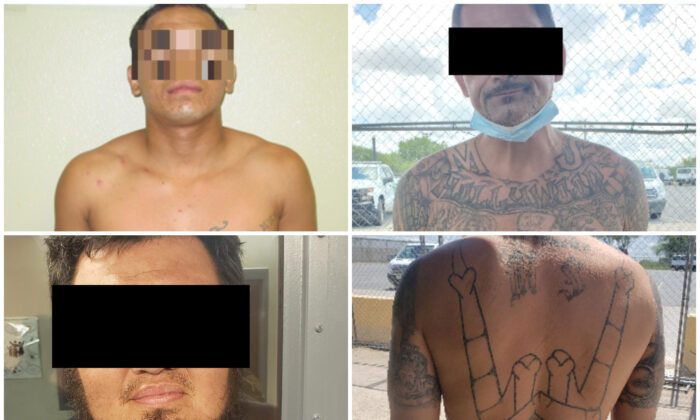 Border Patrol agents have arrested 8,691 criminal aliens coming across the southern border in the past 10 months. Between them, the aliens have committed 12,685 crimes.

On Aug. 14, border agents in south Texas arrested two MS-13 gang members. One, a convicted murderer from El Salvador, was apprehended after illegally crossing into the United States with a group near Mission, Texas. The 44-year-old man spent three years in prison for a murder in California in the late ’90s and was imprisoned again in 2005 for “re-entry of a deported alien,” according to Customs and Border Protection (CBP).

Many criminal aliens are arrested while trying to evade Border Patrol, or as they attempt to blend into large groups crossing the border. While Border Patrol agents are tied up dealing with large groups, the cartels and criminal organizations smuggle contraband and people through unpatrolled areas nearby.

Several Border Patrol agents told The Epoch Times that agents estimate they’re apprehending between 10 percent and 20 percent of all illegal border crossers, although it’s impossible to estimate how many have avoided detection and capture.

In the busiest sectors along the U.S.–Mexico border, agents are constantly being pulled off the line to help process large groups of illegal border crossers—many of whom seek out Border Patrol, knowing they’ll be released into the interior of the country with a request to report at a local Immigration and Customs Enforcement office when they reach their destination.

Additionally, at least 300,000 illegal aliens have slipped past border agents in the past 10 months, according to estimates based on statistics provided by Acting Border Patrol Chief Raul Ortiz.

The 8,691 criminal alien arrests over the past 10 months is about a 328 percent increase over fiscal 2020, if accounting for the two-month reporting difference.

Border Patrol agents are often not able to immediately check for criminal convictions in an alien’s home country, so most convictions that pop up are from crimes committed in the United States that have been recorded in the National Crime Information Center database.

On Aug. 19, Border Patrol agents in Brownsville, Texas, apprehended Mexican national Marco Antonio Tellez, who was previously arrested for first degree attempted sexual abuse of a child in Lexington, Kentucky. He was sentenced to one year in prison, registered as a sex offender, and then deported, according to records.

Two days earlier, Honduran national Arlin Reinaldo Ruiz-Cardona, was arrested as part of a group of 46 in Rio Grande City, Texas. In 2011, Ruiz-Cardona was arrested in New York City for raping an 8-year-old girl multiple times, according to New York records. He was sentenced to four years in prison and subsequently deported in June 2015.

One of the most recent arrests was conducted by Texas state troopers about 70 miles north of the border. On Aug. 22, troopers apprehended two illegal immigrants at the Brooks County rest area. One of the men was a confirmed MS-13 gang member from El Salvador with a 2009 conviction for sexual battery in Hall County, Georgia.